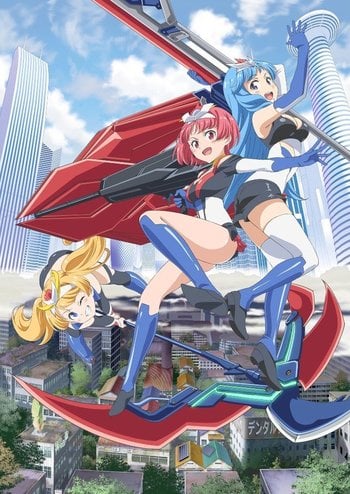 During a fierce battle to protect the Angel Base from rebel invaders, Milfeulle saves the Angels’ lives by running away with a rogue grenade. When she wakes up she thinks that all is well, except that nobody but Normad can see or hear her! She is then told that she died in the explosion and is now a ghost. Luckily Normad tells Milfeulle that she can still regain her life by using Lost Technology that will switch her soul with that of someone else, but will she use it on the Angel team now that they appear to have forgotten her? Then one day Col. Volcott and Major Mary of the Twin Stars receive letters informing them that they will swap jobs. With Mary now in command of the Angel Team, Volcott takes charge of the Twin Stars. Desperate to prove that he is not as incompetent as he looks, Volcott needs the Twin Stars to complete a mission successfully. However when the two boys make a mistake say something forbidden to him, Volcott begins a crazed rampage for revenge. Will anyone be able to stop him?

Mou Hitotsu no Mirai wo.

The short takes place at the KDDI R&D laboratory, where scientists are creating a telephone that can call the future, but an incident occurs when they are using the phone.

The children's anime revolves around Velonica, a high-handed and ultra-selfish little alien girl on the Galaxy Network, who begins to cause havoc on Earth. After a “fated encounter” with an Earthling boy, Velonica wavers between a possible budding romance with the boy and her dedication to the arts.

The anime takes place in 2102 where future has advanced beyond what was imagined in the 21st century and in 2016. 17-year-old Nami is a high school girl living everyday happily without much thought. A recent increase in "guerrilla heavy rains" has caused to her start worrying a little. She encounters 10-year-old You, a mysterious girl from the near future.

Meijin Kawaguchi and Allan Adams are visiting Yajima Trading's research and development center, in order to test the battle system's newly implemented automatic control mode. This automatic control mode is a revolutionary new option that makes it easy for even people with no control skills to play Gunpla Battle, using quasi-personality AIs based on pilots from various Gundam works. With the Meijin using the Ballistic Zaku, the successor to the Zaku Amazing, and Allan using the Reversible Gundam, a customized version of the Reborns Gundam, they each choose an AI and begin the Gunpla Battle of their dreams.