My Senpai is Annoying - Reviews 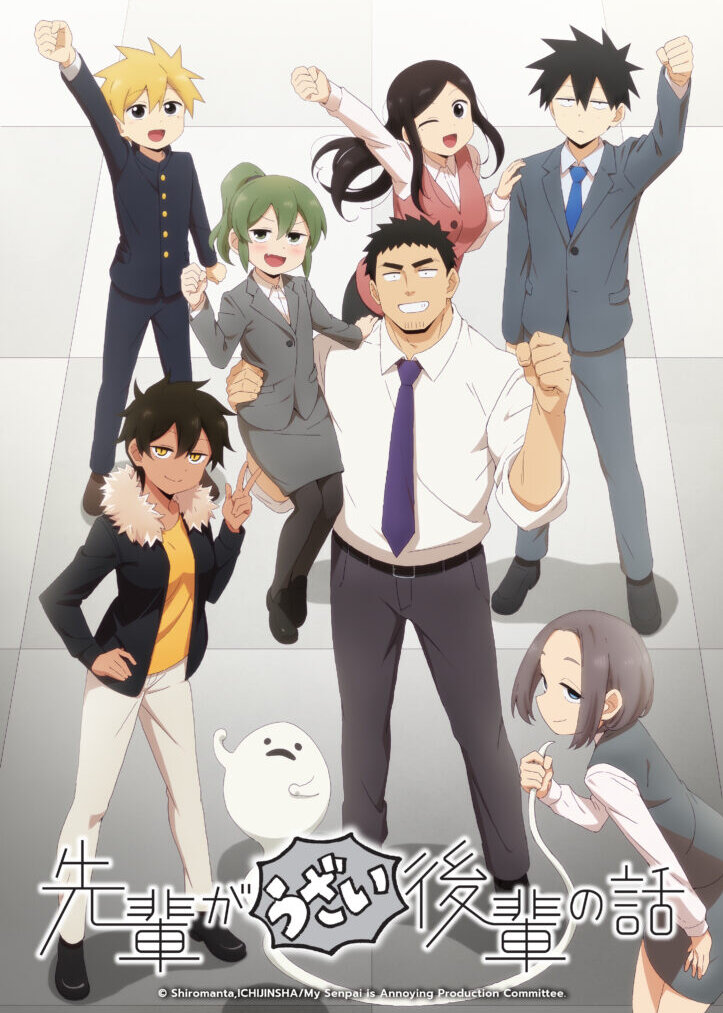 Just loving the trend of wholesome shows lately. My Senpai is Annoying is about the smol office worker Futaba Igarashi and how she is often annoyed by her senpai Takeda Harumi due to his loud, boisterous demeanor. He is also incredibly massive. Though, of course, everyone in the office is aware of her feelings for Takeda and often serve as shippers on deck for them.

The basic premise is episodic, so you could expect a few things: Futaba tries to make people take her seriously only for that to fail and only enhances her childish side. Or she would deny that she likes Takeda but then would perform actions that show that she does care for him. Takeda would be ignorant of her feelings to the point where it could be argued that he views her as a little sister or a "daughter." Or you would have side plots with a few of the supporting cast.

But while the show is simplistic, it is not a detractor from it. The cast of characters is endearing; its light-hearted tone; and its warm depiction of city life calls to mind that feeling you'd get coming home from a grueling day of work.

Animation is also great. It has vibrant colors that add to its feel-good nature. The character designs appear to have been crafted with a great amount of care. Add its piano score, and you have yourself a soothing show.

Speaking of characters, Futaba. She is the most adorable character this year (not counting other contenders like Kana or Illulu). She can best be described as a bit crabby. Because of her small stature, she is often mistaken for a child much to her chagrin. So, she tries to compensate for that with trying to be the best she could be at her job, and yet, her childish demeanor would betray her if she overexerted herself.

Futaba is that one character that you can't help but not only feel sorry for her, but also pet her head and hug her unless Takeda is doing that himself. Her Napoleon complex also goes into other things in her life such as envying her best friend or her coworker Sakurai due to their developed assets. But despite her snippy personality, she is truly a good person at heart: she once saw an elementary student was cold so she gave up her own scarf, or in other instances, she would help people with directions. That is not getting into how she actually does care about Takeda greatly, not that she would ever admit it.

Next is Takeda, who is, without question, the best man of the show, not best boy, best MAN. This dude is the goat. Heck, not even the goat even but the entire farm. He is as opposite from Futaba like the east and the west with being loud, somewhat obnoxious, and is a powerhouse. But even then, the dude has a huge heart and is caring as evidenced by his teasing of Futaba. The best episode demonstrating this is when he notices some creep taking an on-the-ground photo of Futaba and he seriously grabs him and throttles him. Given how this is known to happen a few times in Japan, this is cathartic.

Going into the other noteworthy characters, Sakurai and Kazama. Their chemistry is just as strong as Futaba and Takeda's. Kazama is the stoic type who hardly smiles, but it is obvious that he has feelings for Sakurai but is so self-depreciative, he believed that he had zero chance with a girl like her.

Sakurai herself, however, has eyes only for him and often delights in teasing him. But her problem, opposite of Kazama's, is that while she conveys her feelings through body language, she cannot spit it out that she likes him.

Then there's Mona, the most bizarre of the staff. She has a weird way of thinking that is incomprehensible to the others and carries out her decisions without a second thought. She also carries around a vodka bottle which she claims to be just water, but then she would go as far as to put vodka in everything so I think she is drunk on the job all the time yet still capable of performing her tasks. She even made chocolate loaded with vodka for Valentine's Day.

Hijikata is the Cassanova Wannabe who is pining for Sakurai because he knows that she would be too nice to turn him down despite her being Kazama-centric. Funnily, would ship him up with Mona for the lulz.

Lastly, there is the department chief called such because his name is not known. He is a benevolent boss in a lot of ways: he allows his employees to eat lunch outside of the office; values the emotions of his employees; ensures that everyone leaves the office before 8 PM; and allows sick leave without penalty. For someone owning a white color company, these are MASSIVE improvements due to the overwork culture native to Japan. Overall a good boss even if he has a toothbrush mustache.

While My Senpai is Annoying is not an immediate must-watch this season, its steady pace and lovable characters are sickeningly sweet and addictive.

What is this anime?
The MC starts working at a company and is trained/sits nearby this "Senpai" thats mentioned in the title. The MC looks like a child and the senpai looks like a gorilla. We watch their relationship grow and change, as well as the relationships of their co-workers around them.

Did I enjoy it?
It surprised me. Judging from the title, I thought it would be similar to shows like "Teasing Master Takagi-san" or "Don't Toy With Me, Miss Nagatoro". However, it is more laid-back. And while her senpai teases her at times, it is nowhere near the focal point of the plot. There is a running story where we see everyone's relationships evolve, and I hope to see more in the future.

This was very cute. If you want to watch cute, fluffy slowburn romance would recommend it. I liked how the ending of this season gave us a good look at from season two will start and how their dynamic is going to play at. And I am very excited!

It's perfectly fine. It's good even. But I can't shake off its originality or it's the romance progressing at a snail's pace, I mean it feels like it's gonna take five seasons until they kiss. Even, how the side romance can be more engaging than the main one because of how stagnant it is. Some of its side characters are woefully underbaked, like Mona who has probably 5 minutes of screen time across 12 episodes. But, I still enjoyed myself and because of this show I've found a passion for anime.

heres a quick review for you guys, a pretty solid SOL with fun comedy, no super melodrama near the end, good animation and likeable characters. for whatever reason to watch an SOL like  something a bit slower and less serious then "my senpai is annoying" is a solid pick.

i hope you enjoy, thanks for the read and  have a good one!