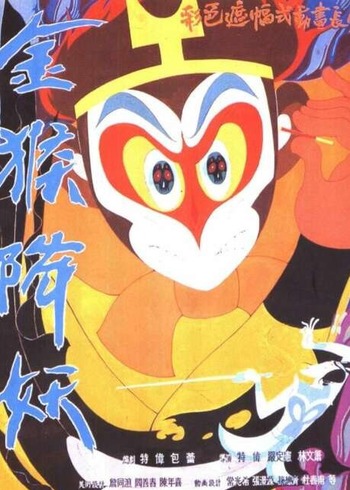 A completely remade animation film based on the original 1961 animation The Monkey King, set in mythical ancient China. Born from some magic stones that fell to the Earth a long time ago when Goddess Nuwa mended the sky, Sun Wukong, also known as the Monkey King, sets off on his first adventure to gain a worthy weapon. This earns the attention of the Jade Emperor of Heaven.

Alakazam used to be a normal monkey until he took the steps to become the king of his kind. As ruler, he quickly becomes selfish and cold-hearted, caring only for power and his own whims. Determined to defeat even the most powerful rulers of the land, Alakazam sets forth to prove his might, not realizing that soon he'll be forced to embark on an even more grand adventure...

The Big Fighting Between Wukong and God Erlang

Forever making trouble in the King’s mansion, Wukong was given the job of running the Peach Orchard. After he destroyed Mother Queen’s peach party and stole the Golden Elixir, Mother Queen sent Heavenly King Lee with 100,000 heavenly soldiers to capture him, but Wukong defeated them all. The God Erlang was sent to fight Wukong and after three hundred rounds, Wukong was captured. With the Golden Elixir, Wukong could be captured but not defeated and Jade Emporer had no choice but to ask for help from Rulai Buddha, who has boundless supernatural power.

One night, a meteor came crashing down on a magical planet, carrying with it a monkey whose body is as hard as stone. With this unusual power, the monkey soon becomes the king of the monkeys atop Flower Fruit Mountain, and rules with a selfish, egotistical and controlling fist. While evil ruler of the underworld wants to mold the monkey into a tool of his using, the forces in the heavens want to make certain the monkey doesn’t threaten the balance between humans and the wild. With the forces of good at his feet, the stone monkey sets forth to gain the ultimate divine power so that he may strike down his enemies where they stand!

Adapted from the popular Chinese folk tale "Journey to the West," and produced by the Wan brothers in the midst of World War II, Princess Iron Fan is the first feature length animated film produced in China. We follow the Monkey King and his friends on their journey to the west. As they reach Fire Mountain they are unable to pass because of the fire but learn that a special iron fan can quench the flames. However, the fan belongs to Princess Iron Fan and she will not willingly lend it to them.