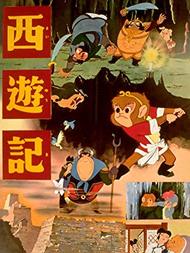 Alakazam used to be a normal monkey until he took the steps to become the king of his kind. As ruler, he quickly becomes selfish and cold-hearted, caring only for power and his own whims. Determined to defeat even the most powerful rulers of the land, Alakazam sets forth to prove his might, not realizing that soon he'll be forced to embark on an even more grand adventure...

Important: It should be noted that I am reviewing the dubbed version which was designed to appeal to American audiences.  It had a heavy marketing campaign here in the U.S so I assume there are noticeable differences to appeal to the American market. The original, Japanese version is called Saiyuki, which I do not have access to. Story Alakazam is based off of the old Chinese legend/novel Journey to the West which followed the Monkey King's exploits as he, quite frankly, journied to the west.  Alakazam the Great stayed relatively faithful to the original legend despite a few tweaks to shorten the epic down to an eighty minute family film. The story behind Alakazam is both charming and magical, although it will probably appeal more to children than adults.  The plot is relatively simple.  Monkey see, monkey do.  Literally.  After Alakazam, our protagonist, is made king he becomes self-obsessed and arrogant.  When he sees something he wants he takes it.  Early on, Alakazam learns about Merlin, the grandest magician of them all.  Alakazam travels to Merlin and, being the tricky little monkey he is, dupes the magician into teaching him everything he knows.  This is where the heart of the fable comes into play. Alakazam, being the arrogant trickster he is, abuses those powers and must go on a pilgrimage as the prince's bodyguard.  None of this is a spoiler, by the way.  The development of the film is extremely rushed and very predictable.  But it is a childrens' movie first and foremost, and this seemed like a decision more to keep their interests in check.  However, even young children can appreciate a compelling story such as Ponyo's, so I do not feel like there was any good reason to rush the plot.  But despite the rushed start, Alakazam the Great develops into both an exciting and sentimental story. Animation Alakazam was released in 1960.  Screenshots may deceive you into thinking this is a badly animated film.  You'd be wrong.  The animation is magical to say the least.  With transforming, mystical beings and beautiful landscapes, Alakazam's artwork was way ahead of its time.  Some might even compare Alakazam to early Disney works.  The similarities are there, except you won't find racist/perverted easter eggs in Alakazam the Great! Oops, sorry Disney fans! Sound I wasn't entirely impressed with the sing-along songs to Alakazam. They were charming and very well done, but they just didn't seem to fit properly into the film.  It should also be noted that the voice of Alakazam was sang by Frankie Avalon.  If you don't know who that is, ask your parents.  He was kind of a big deal.  The sound effects fit the animation well and the voice acting was surprisingly good for such an early dub.  In fact, Alakazam was one of the earliest animes to be dubbed for American audiences. The dialogue itself was also nicely translated.  The dialogue helped create interesting and often times funny characters.  In one scene, two heavenly men pass by and greet each other by saying, "Halo there."  The other man replies, "Halo to you!"  See what they did there? Hurr, hurr. Characters Here's the real charm to Alakazam the Great. The characters have everything you need to make a good film, but truly Alakazam himself is the one that takes the cake.  While all of the characters have something unique to offer, Alakazam goes through the most character development and he is the character that adults will sympathize with and children will learn from.  Alakazam underwent an extreme character development during the length of the film, not uncommon in most fables.  However, what makes Alakazam so unique is how susceptible he is to his own desires.  Think of Lelouch from Code Geass as monkey.  He's almost too clever for his own good. Overall Despite its age, Alakazam the Great still remains as captivating as ever.  With an engaging and family friendly story about morality, humility, mercy and wisdom Alakazam appeals to all ages.  While the plot itself may be predictable, the underlying morals and entertaining characters make this the great classic that it is.