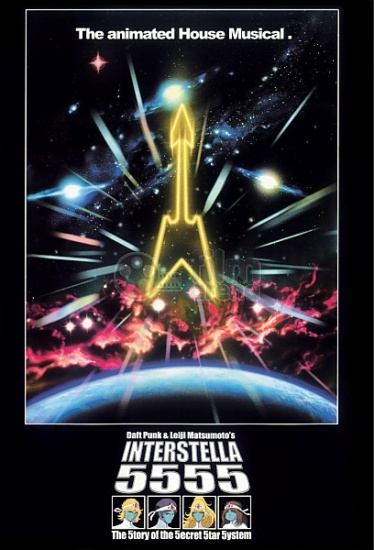 Interstella 5555 - the 5tory of the 5ecret 5tar 5ystem manages to provide a surprisingly entertaining, albeit simple, science-fiction caper. I was impressed pretty much throughout the show at how well they managed to synch the mood of the song with what was happening in the story (although as mentioned below, the synching of the animation to the music was less impressive). Overall, quality work from start to finish.

The animation is certainly not bad by any means, but in the end is somewhat unimpressive. I enjoyed the unique character designs and the liberal use of color, but found anything regarding actual motion to be rather workmanlike. I also have a complaint about the synching of the animation to the actual music. While there is definitely some interaction between what happens on the screen and what plays in the background (high points are the sequences for “Harder Better Faster Stronger” and “Crescendolls”), in the end the synching technique isn’t nearly as nice as what I’ve seen in homemade AMVs on animemusicvideos.org (although perhaps that level of quality is impossible for those who are actually interested in making money).

The score that anyone gives this category will depend almost entirely on musical taste. In my opinion, Daft Punk’s CD Discovery is good, but suffers from issues of consistency. Most of the albums’ best tracks are lumped together at the beginning, and thus leave the final half of the work feeling anticlimactic and slow. This is especially important due to the fact that the anime depends almost entirely on the album for things like mood, pacing, and storyline. When the music begins to lag in the latter half, the actual show soon follows.

Overall, however, I was very satisfied with how the music was used to aid the storyline, and the first 5 tracks of "Discovery" are some of the best dance music that Ive heard.

If there’s one thing that this anime proves beyond a doubt, character development simply cannot exist without dialogue. The director tries a lot of different things to increase the overall appeal of the characters (most noticeably the character designs and some half-baked romance), but in the end his efforts merely elevate them to mediocrity.

Interstella 5555 belongs to a genre of anime that I prefer to call “noble experiments.” These shows try something completely different from anything that has been done before, often at the cost of what many consider to be basic requirements for a show. Cat Soup got by with just about no character development or storyline, FLCL’s wackiness cost the show a lot in terms of general coherency, and Texhnolyze's minimalist approach carried out a good portion of its story with absolutely no dialogue. Interstella 5555, on the other hand, is an hour-long AMV set to a Daft Punk album... nuff said.Unfortunately, unlike Cat Soup, FLCL, or Texhnolyze, the movie doesn’t bring enough to the table to really be called a classic. While the sheer novelty of the production goes a long way towards making the film entertaining, its numerous faults prevent it from being truly spectacular.

While I’ve spent most of the review bashing the shortcomings of the anime, I still enjoyed it a fair deal. The sheer idea of the work makes the movie seem very fresh and interesting, and the storyline is surprisingly engaging when all is said and done. If you’re a fan of Daft Punk’s work, I’d definitely recommend this. Do not, however, expect greatness. In the world of experimental anime where shows are usually either hits (Kino's Journey) or misses (Angel’s Egg), Interstella 5555 is decidedly lukewarm.

Back in the "good old days", when MTV was actually Music Television and not a channel for "Reality TV", Kazaa and Napster made piracy popular, and you had to go out of your way to record your favorite music off the radio just so you could have a tape of your favorite music in one place, music videos were awesome. And they were so huge that they would draw in huge ratings to channels with music programming, and studios would sell music videos on VHS so people could have them along with their vinyl, cassettes, and/or CD collection

Studios would invest a ton of money into them because they doubled as promotional material for the band, and as a result, you would get music videos that were essentially awesome short films with an awesome song attached, such as Michael Jackon's Thriller, A-ha's Take on Me, and Nirvana's Smells Like Teen Spirit. Interstella 5555 hearkens back to these days by essentially being a 60 minute music video.

Interstella 5555: The 5story of the 5ecret 5star 5system (what a mouthful) is an hour long music video telling the story of an alien band to the music of Daft Punk. Interstella 5555 was developed by Daft Punk along with legendary creator Leiji Matsumoto, and was released by Toei Animation.

The story follows a group of blue-skinned extraterrestrial group of musicians who are kidnapped right after one of their concerts, and are brainwashed and altered to look human by an evil music manager. Soon after, a space pilot from their planet, who happens to be a huge fan of the band, tries to save them after receiving a distress call sent out during their kidnapping.

As far as stories go, it's on the simple side, but it doesn't need to be more complex than it needs to be. It is, after all, an extended music video. Any more complex and it would get in the way of the music and feel completely unnecessary. It's also completely void of any dialogue, letting the visuals and music do all of the storytelling.

The music, which consists entirely of Daft Punk's Discovery album, doubles as both the soundtrack and some of the storytelling. The rest of it is told through the visuals, letting the characters actions and expressions do most of the work, which is done masterfully. And considering the complete lack of any dub, anyone can understand whats going on.

It's animation and art style looks fantastic, with Leiji Matsumoto's style shining through. It definitely feels like a '70s era anime, considering that quite a few of the directors works were released.

That said, with all of the praise i gave Interstella 5555, it's not for everybody. If Daft Punk isn't your thing, or having a simplistic story puts you off, you probably won't like this. If you can get past the band, maybe pretend this is a silent film. Interstella 5555 is worth checking out.

I really like Daft Punk and their music and was really sad when they split up. The plot takes a bit of time to kick in but it's really good. Overall, really good movie, would recommend.

If you are a fan of Daft Punk, you might've stumbled upon one of these music clips with blue men or something that seemed like a part of a story. In that case, you have unconsciously already seen one of the thirteen parts that make Interstella 5555 one long AMV. That's what it is, an AMV, featuring a whole album instead of just one song.

The "story" of Interstella 5555 is a sci-fi one. It follows the members of a popular band on some alien "blue people" planet, how they end up on Earth and their escape from the villain. To be frank, the story and the characters were pretty bad and not having any dialogue whatsoever did not help the character development. However, this is forgiven by the awesome music that accompanies the story. It is, after all, an album presented through a bland sci-fi tale, not the other way around.

In short, this movie is something for Daft Punk fans only and is an enjoyable way to go through their Discovery album, featuring ever popular songs like "One More Time", "Digital Love", "Harder, Better, Faster, Stronger" and more.

This is an entertaining sci-if story based on the music of Daft Punk. If you are a fan, you will like this.