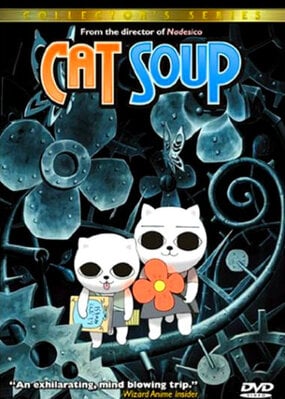 StoryCat Soup is a bizarre and abstract look at the lives of two young kittens, as they peruse the land of the dead. Then again, knowing that information is hard to discern from watching it once, and odds are, had you not read any review or description, you may have not picked up that fact at all. There is no dialogue in Cat Soup, except random noises used for the characters talking with occasional subtitles (in Japanese characters). Usually these words are very simple, not even full sentences. The story is told primarily through the visuals, and again, are very abstract, making it hard to understand what's going on at all. Then again, there isn't much to know. The kittens travel through various places in the land of the dead, encountering various people and things, and having various (mis)adventures. Encounters range from things like meeting (and eating!) and pig friend, walking over giant sand dunes with a water elephant, being almost cooked alive by a giant bondage mouse man (I'm not kidding), and having extremities ripped off and sewed back on. These events should paint a clear picture that Cat Soup is definitely dark in nature, and about as messed up as an anime can get. Indeed, it reminded me quite a bit of reading an Edward Gorey story -- Edward Gorey being my favorite author, a man who writes "children's stories" that definitely aren't aimed at children at all, and have a very sarcastic and random tone to them. Cat Soup is delightfully random and dark, and will make you feel like you just watched something Tim Burton directed while on acid, both for the story and the animation. The abstract nature is confusing, but also fits perfectly with the random (but mellow) tone the OVA is supposed to portray. The ending leaves a little to be desired, but like the rest of the 30 minute OVA, is random in itself. I loved the "story" and randomness of it all, hence the high score in this section. AnimationIncredibly unique and disturbing on basically every level. The artwork combines really cute characters (like the pig, and the cats), with flat out gore and twisted scenery, making for an interesting mix in a matter of seconds, in some cases. The style, when you watch this, will be very reminiscent of Tim Burton or something else dark and sinister. In general, everything about the animation is random. The landscapes are bizarre and charming in their own dark ways, the character designs, as mentioned above, are strangely grotesque and also cute at the same time, and the overall look and feel is appealing. Colors used tended to stay dark and moody, with metallic objects and the occasional bright scenery to contrast with the dark mood. Near the end, there's a scene where the kittens grow extremely fast, we see events happen throughout time (a real shot of an atomic bomb going off, hostages with bags over their heads getting shot, someone getting hit by a car), and then, suddenly, we see everything go in reverse. I won't say why this happens, but it definitely is another example of how unique the animation was. Also very messed up, given the content. All in all, the visuals told the story, the visuals WERE the entire point of the anime, and they did a damn good job at impressing me. SoundThe music was very amusing. Whoever composed it managed to capture the mood of Cat Soup COMPLETELY. Random, quirky tones were used to demonstrate the randomness, sometimes piano based in origin and other times, just random synthesized notes. I know I keep using the word random, but it fits more than anything. At yet other times, the music was non-existant, which worked well, as well. As mentioned in the story section, there is no dialogue to be found in Cat Soup -- rather, the characters make random chittering or "wah wahhh" type sounds when talking. This, like everything else, made it highly entertaining to watch. Subtitles would be shown as well in bubbles with a few words so you knew what was being discussed. The R1 DVD does translate these blurbs, though you could easily get away with not seeing them translated. CharactersThe characters in Cat Soup are hilarious and strange, just like everything else. Due to the fact that there is no dialogue and/or not a lot of story, there obviously was zero character development as well. This score has nothing to do with development; rather, it is based on the varied cast of characters and how amusing they were. We have the two kittens who do very strange things and manage to get out of the hairiest of situations. There's the kittens' dad who drinks sake and has huge thick eyebrows, the mom who wears an apron, and most importantly, the bizarre ones who are in the land of the dead. We are introduced to a pig who has dotted lines and instructions on his body for where to cut a pig. We are shown a very normal looking man who ends up being a bondage guy who wears a mouse hat. We meet a woman who has a very disturbing habit of killing animals and sewing their parts back together. We meet God himself, and see his strange and unusual habits. All of these characters are so strange, and make me wonder yet again what the hell the creators were thinking when they made this! Terribly entertaining though, nonetheless. OverallCat Soup is brilliant, in my opinion. It's random, it doesn't make sense, and yet it manages to be completely entertaining on just about every level. I will admit that for those who don't appreciate Tim Burton, Edward Gorey, dark comedy or randomness, you might not enjoy this at all. Looking for a plot? Go somewhere else. Need something lighthearted and fluffy? DEFINITELY not for you. Want something quirky, random, dark and interesting? Check out Cat Soup, definitely.

I think of all the animes that have been made in Japan's history, Cat Soup is one of the hardest to review. What the hell can one say about something so incredibly bizarre? With mainstream anime, it's generally possible to talk about things like "plot," "characters," or "moral message." Cat Soup flies in the face of such unnecessary baggage. The anime has no recognizable story, the characters have no names and almost no dialogue, and the OVA as a whole doesn't even begin to make any sort of sense. Even with the similarly constructed Angel's Egg, one has an ample opportunity to comment on the existentialist themes, the various ways the movie could be interpreted, what the characters symbolized, etc (or, in my case, give the anime all ones and say it was boring as hell). Cat Soup does not pretend to have things like "symbolism" or "themes." Instead, Cat Soup opts to be an enthusiastically unintelligible mind-f***. To call it nonsensical is actually somewhat wrong - this is dissensical. The anime does not make sense, and things that get too close to it will probably make less sense as well. Cat Soup is not only devoid of logic, it emits an aura of anti-logic... and yet, amazingly enough, despite all of this, the anime remains remarkably entertaining. For one, Cat Soup sports some of the best, most imaginative animation that I have seen in any work. The imagery really is brilliant; while watching, I felt like I was viewing an animated surrealist painting. Salvador Dali would send his love. Also, I thoroughly enjoyed the sound of the OVA. When present, the music is a kind of fake cuteness that reminded me of the music from Alien Nine. Oddly enough, this music fits the anime well, and is a good pick by the director. Sound effects are sufficiently mind-warping to match the visuals. Also of note, there is no real "dialogue" in the anime; instead, word bubbles are formed over the character's heads, with garbled gibberish to accompany it (anyone ever play Banjo-Kazooie?). As for the plot, the first 2 minutes of the show start out with one of the main characters accidentally drowning herself in a bathtub. Her soul is then stolen by Buddha... and well, it only goes downhill from there. Cat Soup is almost completely devoid of a coherent storyline, but fortunately enough, that doesn't make the anime any less interesting. Similarly, though lacking in development, the characters still manage to be amusing and memorable. Total insanity aside, Cat Soup is a very good way to spend 30 minutes. The OVA as a whole is remarkably funny, and this really has some of the best animation around. All in all, I thoroughly recommend it; however, when you see this anime, make sure that comprehensibility is not high on your "priorities" list.

Cat Soup can be summed up as "What the *%@$". The art is odd-ball and bizzaro, there's no dialogue, no script, hardly any developed characters (Strange ones at that) and that's not even touching the "plot". The point of Cat Soup isn't about the plot but the journey; the places you will go and the people you'll meet, as messed up and crazy as they are. There's the elephant made of water, the pig that is cruelly taken apart (It gets worse), the man with the mask and spiked speedo and everything else. To mention it all would ruin the surprise and those are just the screenshots. I don't know what to rate the story and as such, leaving it be. The animation is simple, strange, odd, brutal and it suits it perfectly. There's nothing spectacular in a technical standpoint but artistically, it's great. Half of the fun is in the events, the other half is in the presentation of said events. It doesn't delve into complete abstract dope-trip visuals that look messy and confusing but it has restraint. No dialogue, no voices and that's perfect. At first I didn't entirely like it but it brings about it's own charm. It grew on me and I learned to enjoy the silence of the cats and whatever beings they meet along the way. The music is subtle and doesn't get in the way but it has a presence due to it being some of the only sound at times. Characters? What characters? There's a cat, his big sister and whatever beasts and things that inhabit their messed up world. Who needs depth when you have a water elephant? Quite simply, you have to watch this. It's odd, funny, strange, disturbing; all sorts of stuff. It's genius and madness; insanity and brilliance and at the end, I don't even know what I watched. It's Cat Soup. Drink it up and come along for the ride. Just, don't be influenced when you do though. Kinda hard to score it... but well worth it. 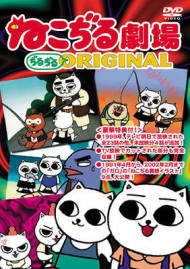 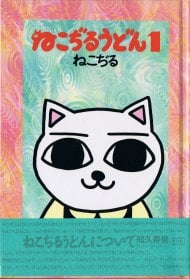 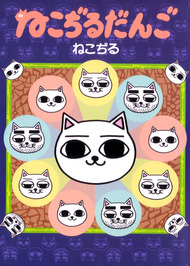 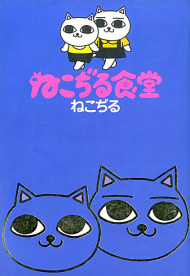 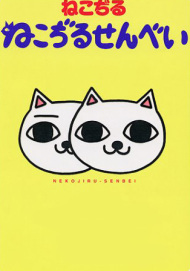