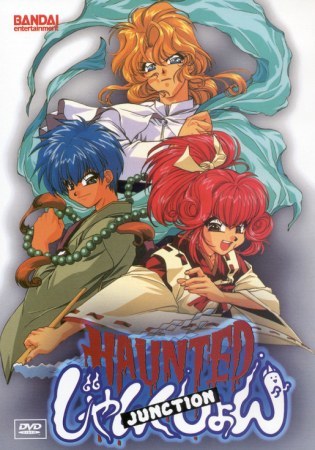 The story is fairly simple. Three high school students, each member of a different religion, form a spiritual council in order to prevent the spirits in their over-the-top haunted school from causing trouble to the general public. Only the first and the two last episodes have story continuity while the rest (2 to 10) are stand-alone missions, where the three teenagers face the mischief of some spirit. So the premise is just an excuse for endless comical situations yet it focuses a lot on its characters since everything centers on someone’s quirks.

Although there are no prevailing or original characters, they all have very funny and nicely depicted personalities.
- The leader of the council is a Christian male, who always plays the moral and incorruptible and nags all the time like an old maid. He is the target of everything depriving and chaotic happens in the story. His catch phrase “OH MY GOD!” is the sign that something awesomely funny just happened.
- The second member is a Shintoist female with an uncontrollable sexual urge for underage boys. You won’t believe the bold things she does in order to satisfy her twisted fetish.
- The third member is a Buddhist male, who gets possessed by spirits every 10 minutes and acts like a ridiculous sex-driven beast.
- The president of their school is the ghost of an old man who loves to play tricks and causes more trouble rather than helping them with his wisdom.
- The most famous spirits in the school are a sex-bomb girl that arouses boys in the boy’s toilets, a handsome man that seduces girls in the girl’s toilets, a living statue of a studying boy that becomes a sex toy, and two living anatomy statues that like Kozac dances.
- To sum it up, most characters are essentially reverse stereotypes of ideal images of religious people and renowned spirits of Japanese folklore. You must be well aware of Japan’s traditions if you want to “get the joke” but even if you are not, they are still very funny most of the time.

DEEN is again proving what a worthless piece junk of a studio it is. The production values are very crude and of low budget, as there is plenty of choppy animation, stale images and repeating footage. But that still doesn’t prevent the show from having funny body motions and good old slapstick humor.

The music themes are not bad yet nothing to remember. Also, the voice acting is very passionate most of the time, even if it feels like they weren’t really trying much.

Despite its silliness, it is still decent slapstick comedy with many bold jokes and memorable scenes. The thing is that you must be aware of several cultural and mythological features of Japan in order to get most of the jokes. If you do, this title will be a almost non-stop laughing ordeal. It’s still not much of a show to bother rewatching ever again but it is a fine one-timer.