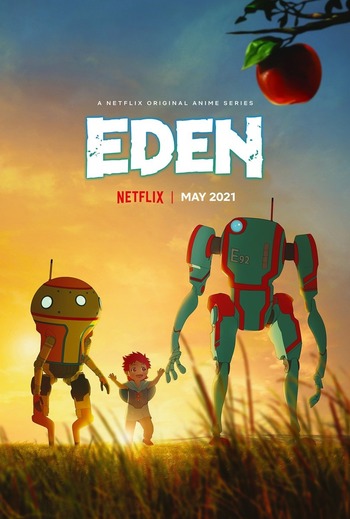 Eden, it's was a sort and sweet little anime to watch that only consisted of 4 episode. It was a nice little thing to watch to pass and hour and 20 minutes. Since it was so short there wasn't to there, story and character wise. Although it was sweet and heartwarming at times I felt like it was kinda very cliché story that used over used chartcher troupes and plot point. In my opinion it wasn't anything bad and it wasn't anything good.

Why I gave it the scores I did;

Animation: 7/10   The whole thing is CGI and I'm not a fan of anime that are purely CGI, they did an ok job with it but it still wasn't the best.

Sound: 8/10  I found my self actually quite enjoying the sound track and the VA all did a pretty good job.

Characters: 4/10  Most of the characters are a over used trope and it made it way to cliché.

Well worth the watch, I put it off thinking it was for just little kids, but it really is a nice short story of only 4 episodes for everyone. The characters grew on me, and the protagonist is perfectly played by the VA. I wish it was longer and deeper, but I thoroughly enjoyed it. I easily binged it, and I definitely recommend a watch.

Short and sweet little anime to watch if you want to kill an hour or two. really enjoyed it and would love to see a second season/ part 2. Almost made me cry - thinking about each scene and the back story of the characters. Would recommend!

This is more like a Disney cartoon than an anime. Definitely aimed at kids 12 and under. Netflix needs to take a break from anime and reevaluate its approach. None of the recent Netflix original anime series have been above average, and Eden is no exception.

Story: It's only 4 episodes, so the story development is poor, and the pacing could use some work. The tags and decription on this site should be changed. I went in thinking this was going to be a cute child-raising anime with dark undertones and good world-building like Somali and the Forest Spirit. Instead, I was met with a really generic sci-fi premise that doesn't do a single thing original. Everything about this was dreadfully predictable.

Animation: It looks like a video game. What was even the point of using a CGI style? Did they think it would attract kids to the show? It just looks bad. Every movement, even just talking, looks so stiff and out of place.

Sound: Voice acting is fine. Nothing special. Neil Patrick Harris and David Tennant are in the dub. I never noticed NPH's voice, but this was at times some of the laziest acting David Tennant's ever done. And that isn't a jab at him. There's only so much you can do when you're supposed to act like you're a robot that can't feel anything yet also act like you're somehow in pain. I laughed hearing Tennant go "da...daaa...da" with a bad robot effect overlaying his voice (episode 3). I never noticed the music, so that means it was average.

Characters: Generic, cliche characters. The main character was annoying and kind of a Mary Sue. She's some super-genius but can't use common sense. She's apparently really good at combat somehow yet only kicks into that instinct when it's too late. She's a brat and can't seem to get it through her thick skull that the world isn't safe. These robots act like machines that can't process anything illogical one moment and act like clowns and exhibit emotions the next (a product of being a kids' anime). The villain is so overly dramatic despite not being threatening. He's so cliche and oozes "I'm the bad guy, fear me" to the point I was literally rolling my eyes. Best character is the "dog" who kept doing its job for hundreds of years (episode 3). Every other character is either annoying or utterly forgettable.

Overall: The saddest thing is that there's potential here. If this were a full season, took a more serious and urgent approach, fleshed out  the characters and worldbuilding, and had a more inviting animation, it would actually be a good anime. As it stands, though, there's nothing special about this. I give it a 4/10 for being average in most regards and below average in the remainder...

This is more of a relaxed animated family movie, broken into episodes. It has a similar tone to some western-style animated movies like Wally, or something you might expect from Studio Ghibli.

It has an interesting setting and a unique enough take on familiar themes, and concepts. One could never say it is groundbreaking, but there are so many stories out there, its a bit unreasonable to expect. Still, it is very familiar. The plot is servicable and complete, that's more than can be said about a lot of things, but it's by no means amazing.

They don't have a lot of depth, as is the norm for the genre, but a bit more would be my preference. Though given their nature and the format, they doesn't need to be anything more.

The MC is a bit of a brat, which seems unlikely given the circumstances (and subsequently some of their actions also don't seem likely with the setup).  More significantly, they don't really show character growth which is usually the strong point of these sorts of kids shows (consequences and learning from mistakes). Instead it just sort of flips intermittently, so that's a weaker area.

The character with the most depth is not the MC, but they did a good job with that person despite the format time constants.

The art is new in terms of how it was done, but very nostalgic in terms of style. Movement wasn't terrible for this kind of thing, but it was still not as smooth as it could be, and action is fairly simple. The art is also good, but not really note worthy. So overall I would say it is, a little above average for today's anime.

The music is matched well to the tone usually and overall the sound quality is fine. I don't include voice acting in this section, so I won't start. (Honestly I don't like this rubric in general. I find it diverts attention away from what people want to know and prevents a nice cohesive review. Let alone allowing for a diversity of review styles that cater well to the diverse perspectives of viewers).

The voice acting was good but the roboticization, one in particular was not good for a substantial portion. They could have used felt some effects on top and maybe a bit more direction (given the situationally appropriate wonky lines). Luckily those characters don't talk thaaat much, and it doesn't take too much away from the experience. Though it was noticeable enough that jt did break immersion at times. The two AI, stood out as performing quite well by comparison (not roboticized but their general performance), and the MC was just fine.

Overall, if you like robots and distopian worlds it has an appeal. But it mostly would appeal to anyone who either loves, or doesn't don't mind a 'family movie'.

By my rating system, this one is a bit weird: I wouldn't mind watching it again because it was pretty good for what it was. However, I didn't enjoy it to the point that I would feel like I wanted to go out of my way to do so. So a 8 is where it likely sits for the famiky genre, but for my overall preferences it's not that good so I would say 7 maybe 7.5; depending on what you focus on.

P.S. Netflix really needs to stop the BS with these 'seasons' it's a mininseries but it is Not a season by any stretch.