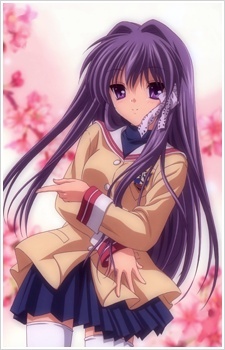 Still, the animation is downright gorgeous, the backgrounds are wonderful, and some shots are inspired. This does makes what would have otherwise been completely generic and average and makes it at least somewhat worth viewing... but really, a love triangle? Ugh. You can only get away with that if you add in a twist of some sort, of which there is none.

Perhaps it is cynical of me to say this, but Clannad: Another World, Kyou Chapter couldn't have possibly been a worse fit for the series, especially as a bonus to the second season. Now for some spoilers: Tomoya met Kyou (again) as his daughter's kindergarten teacher years after his wife died - had a romance between them started there, it would have had potential to be a touching addendum to the series. Instead, it backtracks from the mature tone of the season it comes from.

Clannad had an alternate love angle episode in the first season, featuring a match between Tomoya and Tomoyo.  The contrast of the unmotivated slacker Tomoya and the driven visionary Tomoyo led to a tension where Tomoya had to consider Tomoyo's future as a uniquely successful person.  Love would see these two unlike personalities through.

But in the HIDIVE setup which I used, the Tomoyo chapter was the twenty-fourth of a 23-episode season.  Clearly an original video animation never meant to be a part of the Clannad season.  A great 'what if ...' concept piece to show what would happen if the Tomoya-Nagissa relationship did not click.

This rendition exploring a Tomoya-Kyou love angle was spun from a more realistic angle.  In the HIDIVE setup, the Kyou Chapter was the twenty-fourth of a twenty-five-episode assortment, built in to have the feel of being part of Clannad: After Story.  Episode 22: Nagissa and Ushio both have died, and Tomoya begins to wonder if meeting and falling in love with Nagissa was worth all the misery.  Episode 23:  We see Tomoya's senior year being relived with the thought that he does not meet Nagissa (other than prank her with a booby trap meant for some unsuspecting freshman).  But we see Kyou's twin sister Ryou take an interest in Tomoya, an idea drawn from the first season.  Episode 24:  This episode.  Episode 25:  Tomoya tells Ushio (quite alive) about the story of his love for Nagissa.  This episode recaps the two seasons of Clannad and hints that Nagissa is still very much alive ... and cherished by Tomoya.

This fit gives the Kyou Episode a better feel for reality (Clannad-speaking, that is).  Tomoya wishes never to have met Nagissa.  Run with that.  Ryou confesses her love for Tomoya, who hesitates but is willing to date.  But the relationship goes slowly, so Kyou offers Tomoya to kiss her for practice for her twin sister.  But the near kiss is witnessed, and rumors run amok at the high school.  Soon, Tomoya discovers that Kyou has fallen in love with him, and she has been miserable trying to keep her distance and let Ryou be happy.  In the end, no one is happy.  Ryou can tell Tomoya, 'I love you.'  Kyou can say, 'I love you.'  But Tomoya cannot say these words to either sister.  By the by, this explains why both sisters in the first season burst into tears when it becomes evident that Tomoya loves Nagissa.

A stunning testimony that the feelings of Tomoya and Nagissa, ever renounced for three episodes, was the real deal.  Tomoya's trial is over ... he has passed ... Nagissa returns into his life, with Ushio and Fuuko (her return in After Story was refreshing) and all the rest of the gang.

The fact that the Kyou Episode wedged its way into the Clannad: After Story scheme of things makes it an alternative ending that one can see for all its worth, see why this relationship was wanting (unlike the Tomoyo episode), and joyfully see Nagissa back in action.

You might say an OVA which went with the flow.

Watch the arcs you poor fool!

They have more chest grabbing action per square inch than the actual series. (In my opinion... i guess.) No! I retract that statement! These are facts!

Another “What If” story to make you think “What if the writers actually cared about making the original story as good as these little episodes?”

One of the twins, Ryou Fujibayashi has finally confessed her feelings to Okazaki, and now they’re dating, which leads Kyou, the older and more outgoing of the sisters, to feel left out. One day while in the park with Okazaki, Kyou convinces him he should work on his kissing technique, and although they never actually kiss, kids who see them together at the park start a rumor. Now Kyou needs to prove she wasn’t with Okazaki, hoping if she squashes the rumors her sister won’t have her heart broken.

There wasn’t much character building going on, but just having them focus more on these sub characters was something nice, although the way the write Kyou does at times contradict the extremely rough personality that the show gave her.

I enjoyed this little “Side Quest” more than pretty much ninety percent of the series itself. While the plot was again a little too much like a gal game, it was still more true to life than the scenarios put forth in the show, and dealt with issues a young adult may actually have.

Just to begin, full disclosure, Kyou is my favorite of the Clannad heroines. I am currently playing through the Clannad VN, and completed Kyou/Ryou's paths just today. I love the story being told here, it really feels like a microcosm of everything that Clannad is about, from the crucial importance of family to the heady emotions surrounding all the involved characters. I do heartily recommend it, although if you can, the VN path for them has... more, and does both characters more justics, which is to be expected given that the OVA has only 25 minutes. Both is ideal, neither are to be missed. That's the spoiler free version. I have more thoughts below, but they fall under a spoiler warning.

There are four characters involved in this story, Tomoya, Ryou, Kyou, and Youhei, and the alternate universe's basic assumption writes Nagisa completely out of the story. The plot of the OVA is paced poorly, as it opens with Ryou confessing her love for Tomoya, and him essentially saying that while he hadn't really ever thought of her that way, he'd be happy to date and get to know each other. Ryou comes off as very self-confident throughout the OVA, much as she is near the very end of the story in the VN. This growth in confidence for Ryou is welcome as it makes Tomoya seem much less like a jackass, and fits better with the Ryou from the anime, who, while having the courage to ask Kyou to set them up, has to be pushed hard by Kyou every step of the way. In the VN, we see two dates that Tomoya goes on with Ryou, with Ryou bringing Kyou for the first one out of nerves. This lets us see Ryou starting to come out of her shell thanks to Tomoya, and it also gives us at least a little break between when Ryou and Tomoya start to date... and Kyou offers to practice kissing with Tomoya. This is something of a critical moment, the first time that the emotions felt by Kyou and Tomoya for each other brush the surface, but it makes Tomoya seem even more a jerk and Kyou likewise, as it takes place almost immediately after Ryou becomes Tomoya's girlfriend. The simple truth of the matter is that the OVA watches basically like a highlight reel of the VN's storyline, a necessary change thanks to the time constraints, but you miss a lot of depth, and honestly the emotional arcs that make Clannad as wonderful a series as it is lose potency.

There is one major exception to this, however. Youhei gets time to be serious, and in fact insightful. In desperation, Kyou throws herself at him, and he not only turns her down, as a very mature act for him, but he correctly surmises that she simply wants to be around Tomoya. In a scene that appears in both, but is much longer in the VN, he calls Tomoya out for being selfish by delaying making a solid choice between the two sisters in the hopes that a way out without hurting anyone would appear. Not the role Youhei usually plays, but one that is well written for him and truly gets across the reality of his friendship with Tomoya in all its depths.

In total, would I buy the dvd just for this extra? No, I'd watch it on Netflix, but I would watch it, especially if you don't have access to the VN. If you do, you won't really get anything new from the OVA, but it can be nice to see it in motion. So for telling a wonderful story in a painfully compressed manner, 7 out of 10.