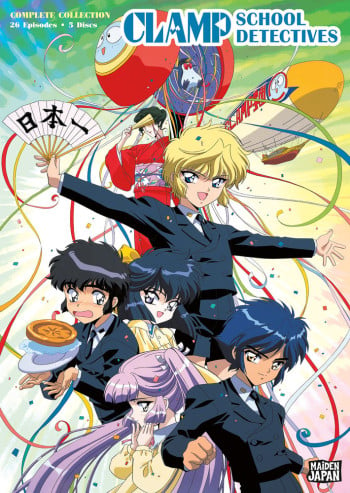 An old anime serries but still fun. By the same people who brought you card captor sakura. It combines both the manga seeries Clamp capus detectives, Man of many faces and Duklyon. Joine three young men as they sovle wonderful mystories at there school, which is filled with super rich or tallented pupils.

Maybe I can hire the Clamp School Detectives to solve the mystery of how the usually amazing CLAMP team put out this series.

The CLAMP School is an elite institution that covers a student’s entire educational life. On their campus they also have everything you could want, acting almost like a small city where they’re students and faculty could theoretically stay for the entire twenty years of their schooling. Like many schools, each school level has their own student council, and the elementary division is run by three young boys who also moonlight as the Clamp School Detectives, a group that is always available to help women in need.

Each episode, for the majority of the series, are silly little one off stories of the boys trying to solve a dumb mystery or help a female with a small problem she may have. None of the plots are very interesting or had cases that would really make you think, it was mostly just goofy childish antics posed as a detective series.

They tried to build some decent back stories to each character, but even then it was all a little too over the top. Nokoru’s many kidnappings, Suoh’s martial arts background that has him beating up grown men, and Akira’s stint as a world famous thief could have been entertaining if it wasn’t for the absurdity if it being connected to ten year olds.

Towards the end of the series the show does add a mystery plot line that runs half a dozen or so episodes, but the huge issue with it is that they tell you who it is and why he’s doing what he’s doing right away. It’s not even a spoiler, the whole arc leaves no doubt what’s going on. One area they really could have picked up some points and they ruin it by having no imagination in making the viewer actually think for a change.

This was one of CLAMP’s earliest works, and it does show, as the character design is almost nonexistent. Take one face and throw on different hair and you’ve got a new character. Heck sometimes they didn’t even use a different hair style, they just changed the proportions.

The actual animation work, done by the normally great Studio Pierrot, is also a bit erratic at times, with body parts not being at all to scale and scenes just being generally dull. Backgrounds and action are also less than stellar, rarely catching the eye as you would expect when these two power houses get together.

None of the major theme songs in the show really came across as great for me. They all have decent music, with the first ending having it’s riff ripped right from The Who’s “Pinball Wizard,” but the attached singing just never matched up. On the plus side they did all meld well with the themes and energy of the show itself. Songs during the series are played again and again, but they were all incorporated rather well, on top of being pretty decent instrumental tracks.

While at times a little annoying, as all our major characters are children, the voice work was still very high quality. It also is pretty interesting to see that in both the Japanese version, as well as the two English versions, the main characters are all voiced by female artists, including the always great Candice Moore.

The way these characters are written really makes you start to dislike them right from the beginning. Having a show where our three main characters are all the best, at everything they do, takes so much of the drama away, because no matter the situation you know that they’ll conveniently have a solution. Flaws often make a character much more interesting than their strengths, so leaving them out just gives you characters, and plot lines, that are hard to cheer for.

The three main boys make up the detective squad, as well as the elementary division student council. Around the school they are all loved by the females and admired by the males, as they are the greatest at all they do, be it school work, sports or even cooking. Those sickeningly annoying traits of theirs are compounded by the fact two of them act as if they are middle aged men and the third as if he’s a complete imbecile.

The only two other reoccurring characters are Nagisa and Okawa, two kindergarten students who are the student council equals of our protagonist. These girls are mostly there to first act as damsels in distress for the boys and then as love interest, which is just a tad bit creepy considering both their age and the age disparity between them and the boys they’re connected to. They bring nothing to the show besides being completely annoying, but they had to break things up, instead of having a show of almost all annoying young boys.

Due to the nature of the show you need the cast to be young, which is a tricky bridge to cross as young children tend to be a drain on any show, but here the problem was that they had young children who just weren’t young in any way. The most likable of the three was Akira, because although he often was presented as a little dim witted and overly childish, at least he was a believable character.

Usually I can suspend disbelief for anime series, as we’re often asked to connect with a flying dragon, robot battles or super powered humans, but there was something about this whole show that made it hard. They wanted everything tied to reality, but then add the silliness of these boys being masters of everything and the ones essentially running the school. It was just never cute enough to be a cute series, intriguing enough to be a mystery series or funny enough to be a comedy.

While this is an episodic series that you could just pick any episode, turn it on, and enjoy, none of the episodes were really good enough where I’d want to do that. Stories were just never engaging enough and their plots were a bit too silly even for anime standards. Paired with characters you couldn’t care less about and it was a major disappointment from these anime greats. I guess It’s a decent series for a younger audience, but for everyone else I can’t see it as more than a single viewing show.

* A fun series, just not a deep series.

* Boring and repetitive even for a procedural.

* Subpar animation for one of the best animation houses.

* A “comedy” that was never funny.

Ways to make the show better:

* Have a little more substance to the cases.

* Make the viewer have to think to help solve the cases.