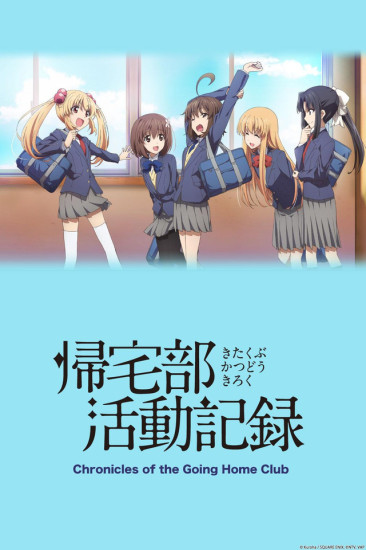 There is no story. That's why this show was so great to me. I wasn't constrained by any sort of requirement to care. The humor made me laugh damn near every time, and I often laughed hard. THIS WAS MEANT TO BE A GAG ANIME, SO RATE IT LIKE ONE. You can't use the same rating process for a drama as you would a comedy. Quit it. In my opinion, this anime is just as funny as Gintama, possibly more. That's it and that's all.

Oh the memories..The hate,the pain,the blood running down my comrade's hands,the screams of burning victims as the bombs came down on us like rain,the sweet release of death as our lifeless eyes turned white.

That pretty much sums up everything about CotGHC,so goodbye no........No what are you doing?Why are you dragging me back?Leave me be,don't make me go through this nightmare again please...

Well they said that if i don't write a proper review they'll send me my wife's head in a bag so..

CotGHC then..It's about..Erm..Maybe it has to do something with Japan's school having a ton of clubs for kids to stay out of their parents way and kids than don't join one are treated as the plague and nobody loves them and they rot away slowly as time fades and with it fades the empty life of those fucks that stay at home and suck their parents happiness dry.

But because this is Japan they had to think of a shorter name and they went with members of the "Going Home Club"..Which in this anime's case it's an actual club with it's own room and stuff and people can join and it's legal..So Natsuke Andou and Karin Touno decide to join this cult and were ordered to sacrifice a baby seal..But the seal cried and begged for its' life and they couldn't handle the cute seal's tears and ended up making it their mascot.

As for the rest of the cult..Well there's Botan Oohagi who goes around the worlds parks and beats bears to a pulp to prove her martial artistic superiority or something..And no this time i'm not joking.

Then we have Claire Kokonoe,whose family is richer than Elon Musk.She also has a bit of an obsession Karin..I forgot Natsuke who has an antenna for hair,always shouts for some reason and plays the role of the "straight man" in this chaos..Karin is the cute airhead who also cooks and is perfect and all girls want to be with her.

Then there's the cult leader Sakura Domyoji,who wears some enormous red hair ornaments and has so much enthusiasm,one could believe she snorted a kg of cocaine.She founded the cult,which she wanted to be a cult that could be about anything.Unfortunately the cult is about nothing at all in particular.They basically sit around a table and talk about all kinds of uninteresting shit,like why a bird doesn't sing or something like that or why the Demon King is such a wimp.

All in all i think these girls would be better off if they actually DID go home.Apart from some good moments here and there,and i'm being very generous here,and the episode with the word chain(7),this anime has nothing to offer.

My mind keeps returning to a line in the closing song,"Don't think,feel!"..Makes perfect sense cause the more i think about it the more i feel i wanna drink bleach with snake venom in it.