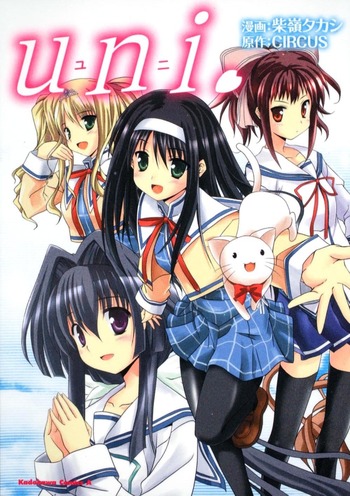 Melty Moment follows Takeru as he gets closer to several girls in high school. He ends up leading an election committee that is filled with cute girls. There's shy little Natsuki, serious little Misao, his childhood friend Yuuka, classmate Sumire, and talented Aoi. Who will he end up with?

The Ootoriryouran Academy is a highly prestigious private school well known for it's high academic standards, ruled over by two separate student groups—the Ryouran Association and the Student Council. Katsuragi Shou is the Academy's newest student. He is greeted by fireworks and celebrations, but soon finds that the academy was oversubscribed. The male dorms are already fully occupied, and the only place left for him to stay is the all female Ryouran Dormitory.

Kissa Sutera to Shinigami no Chou

The main male character is Asaba Yuma, and the story follows the school life he shares with many girls and his one male friend. These girls include Tsukishima Yuri and her twin sister Hanako, who is in the newspaper club, Yuma's little sister Konami, who likes shogi, and several others. Will Yuma find love in his teenage years?

The world as we know it was suddenly altered forever when the door for the dimension of the gods and the door of the dimension of the demons suddenly opened up. Ten years later, a boy named Tsuchimi Rin was entrusted with two princesses from those dimensions. Will he be able to keep his sanity while living with his childhood friend Kaede, trying to live a normal school life, and also being a neighbor to both of princesses and their fathers, the mighty dimension Lords? The hearts of those girls are at stake and only Rin has the key to unlock them.

Igarashi Yuna is a transfer student in St. Louis High.