The Strongest Sage: The Story of a Talentless Man Who Mastered Magic and Became the Best - Recommendations 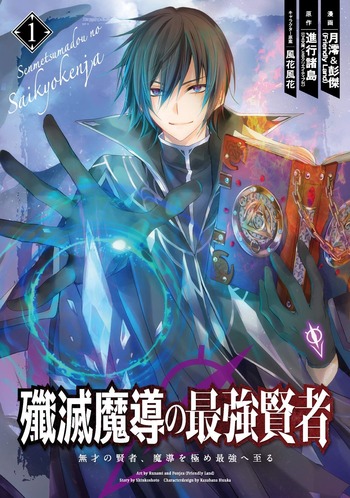 If you're looking for manga similar to The Strongest Sage: The Story of a Talentless Man Who Mastered Magic and Became the Best, you might like these titles.

Both are fantasy world (magic and swrodship) with concept of crest on hand.

Both MC are OP with one of worst crest. Both of them are were looking to improve they magic and looking for strong oponets. After time they became legend.

Both of them make team with they discaple (in both team is dragons in human form).

Mag was gifted the skill [Decoy], a skill capable of attracting monsters and causing disasters. As such, he was banished from the city. Therefore, he decided to live alone in a hunting cabin deep in the mountains. However, there, he draws the attention of Divine Beasts: Loa the Dragon (a beautiful girl), Fiana the Phoenix (another beautiful girl), and Kelpie the Maera (another beautiful girl). In the end, Mag decides to spend a easygoing life in the mountains with the Divine Beasts. But the skill [Decoy] is not making it easy for him...

Emperor Ludis suffered an unjustified death because of his Emperor’s Mark, which allowed him to make servants out of monsters. But instead of dying for good, he reincarnated a thousand years into the future. His previous life gave him no freedom, so this time, he’ll take it all and travel the world as an adventurer! But although he pretends to be normal, he gathers servants again and becomes the strongest adventurer! Come see what adventures await Ludis in this monster-filled isekai fantasy!

"Classes" are given at the age of 10, and the presence or absence of "skills" greatly affect life. Arel, the son of "Sword Princess" Fara and "Magic King" Leon, has been branded as "Classless"... But even without a job or skills, Arel believes he can persevere through effort.

A man who was enjoying an evening drink got transferred to the body of Liam, the fifth son of a nobleman from another world. "I spent easy days practicing the magic I had longed for, and learned not only attribute magic, but also how to summon spirits, obtain powerful familiars, and ended up mastering even the most difficult magic!" He became an adventurer aiming for independence from his parents' house, which was scheduled to fall, and before he knew it, he became a higher-ranking aristocrat rather than one of the best magicians in the world.