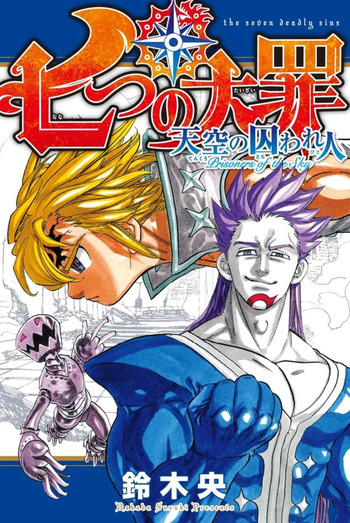 If you're looking for anime similar to The Seven Deadly Sins Movie: Prisoners of the Sky, you might like these titles.

The distant land of Esteria, once known for its magic and beauty, has fallen under siege by a demonic force. Meanwhile, Adol Christin, a young swordsman from Promarock, sets off on a journey to find Esteria. For fame? Fortune? Neither, it seems. Young Adol travels because of a feeling, a feeling of great importance that tells him to find Esteria for an unknown purpose. Now, with danger around every corner and demons at every turn, Adol must search for the six books of the lost empire Ys in an effort to save Esteria from evil forces, as well as to save the world itself!

Ys II: Castle in the Heavens

After the defeat of the dark lord Fact at the tower of Dahm, the great swordsman Adol Christin is whisked away to the island of Ys in the sky, a place that has been controlled by the demons for centuries, keeping its residents living in fear. With new friends to save and greater enemies to defeat, Adol must now fight the evil that seeks to control not only Ys, but the entire world, with the help of the black pearl bestowed by the goddesses so long ago.

Strike the Blood: Valkyria no Oukoku-hen

Kingdom of Aldegyr and the Lost Warlord's Dominion are holding a signing ceremony to extend their mutual non-aggression treaty. While La Folia is with them, Kojou does not anticipate meeting them as they are busy with work. However, an evil terrorist plot threatens the signing ceremony and it is up to Kojou and Yukina to stop them from succeeding.

Reid, Farah, Meredy and Keel are on a quest to save the twin worlds of Celestia and Inferia from 'The Grand Fall' – a scenario in which both worlds would collide into each other. But when Reid is kidnapped by a bounty hunter called Marone, one thing leads to another and the four friends end up stranded on the tropical island of Belcarnu! And when Keel discovers some uncharted ruins on the island which seem to have been built by the Celestians, it becomes clear that there is more of a mystery to the island than meets the eye. Will the four be able to escape the island and prevent The Grand Fall?