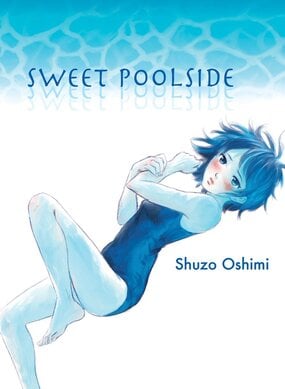 It's crazy to think about how it all started for Shuuzou Oshimi. Before works of deep psychological content like Aku no Hana, Chi no Wadachi and even his most recent manga, Okaeri Alice. Shuuzou Oshimi did some pretty .. curious manga. It serves, on the one hand, to see the evolution of his art, themes chosen to approach and characters, and if it were to put a current work and a work like Sweet Poolside side by side, it would be difficult to believe that it came from a master of psychological horror.Speaking of an aspect that has changed a lot, his choice of themes, in manga like Sweet Poolside and another called Avant Guarde Yumeko, both have addressed many futile themes. In Yumeko's case, clearly in a tone of joke and satire, Poolside has a bit of that joke in the middle, however, it is still a proposal applied in a standard way, without satires. And what is your proposal? Well, there are two protagonists, a boy named Ota, who is in his adolescent phase but does not grow any hair on his body, resulting in becoming a joke of his colleagues giving him nicknames and wanting to touch him. The other protagonist is a girl named Gotou, who is the opposite of Ota in this aspect of ... hair; Gotou has hair on various parts of her body. Aware of this, both abhor the existence or non-existence of hair on their bodies and soon their paths cross, with this, Gotou convinces Ota to shave her body, advancing more and more in phase. A futile topic, with nothing to be properly explored, you can’t charge or expect anything from reading, very weak. Most curious not only of Sweet Poolside, but like the manga of the time, they tended to have a strange sexualization in the face of these futile themes like hair removal and it is something that made me very uncomfortable. In the final chapters it tries to build a kind of cliché drama but with a theme like this it is impossible to take itself seriously. But a positive point, although small, was the comedy of Sweet Poolside, it was a side of Oshimi that I had never seen before and I could have a good laugh.Another aspect that has had a great change is the art, certainly the work that can be noticed the biggest change is in Aku no Hana where there is clearly an exchange of drawing strokes and use of them, but here we have the standard art of Oshimi from years ago. No gibberish, no details, no style that helps in setting the manga. A lighter art, but without the charm of today, and without its own characteristics. As it did not address psychological and heavy topics as today, I do not see art as terrible, but it is very weak even individually.The characters are a mixture of irritants and some without grace, the protagonists do not aspire to charisma, Ota followed the pattern of Oshimi in the sexualized time of his manga, a boy discovering himself and the like, but not in a profound way as nowadays, but in a very average way and still with these themes that do not help. Gotou gets involved in a decision to share her love with the boy who shaves him and a boy he talks to during swimming lessons who seem to have some contact, but she is a very weak character. There are other characters that help in the plot, but more to ridicule Ota and rub in our face the motivation for his anger with his body, like Sakashita who constantly wants to touch Ota, Nakayama who is a complete sucker and leaves Ota naked and shows publicly his absence of hair and his parents who are not so supportive, constantly mocking his son. There is also Ninomiya, Gotou's love interest, but he has the same pattern of dialogue so he is boring.This manga is to show how Shuuzou started with low quality but evolved into a great manga, the manga is horrible, but I was happy to read and see the evolution that my favorite mangaka had.1