Alt titles: Ibeon Saengdo Jal Butakae, Please Take Care of Me in This Life as Well 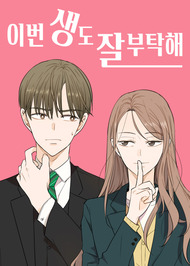 Jieum Ban has an extraordinary ability: she can remember the memories of all her past lives. After her previous life is cut short by a tragic accident, she sets out to reconnect with the people of her past life in her current one. Will memories of her 18th life sabotage romance in her 19th? Or will love endure across different lives?

Not gonna lie, the inital summary of this story threw me off immensely but I'm glad it's been updated to be clearer. I can assure you, if you're looking for a promising plot, this webtoon does not fail (especially if you enjoyed 'A Good Day to be a Dog')! Story: 10 *mild spoilers but nothing you won't learn from the summary or the first three chapters* Our female lead is first introduced to us as young girl named Yoon Joowon, who develops an interesting relationship with her family friend, Moon Seoha. However, Joowon is abnormally mature for her age. She has a secret; she can remember all of her past lives and she's currently on her 18th life. While Joowon and Seoha initially dislike each other, they quickly warm up and grow to like one another. Before either of them can confirm their feelings, Joowon passes away in a car accident after saving Seoha.  Flash forward several years into the future where Yoon Joowon has been reincarnated into her 19th life as Ban Jieum. Because she saved Seoha's life in her past life, she was immediately reincarnated and currently is looking to meet Seoha again. When she finally meets him, she learns that Seoha is still holding onto Yoon Joowon and is burdened by the weight of her death, so she begins changing her strategy. She wants to 'take care of him in this life as well' but she's afraid to do that as Joowon. Thus ensues her quest to sincerely win Seoha's heart, while several mysteries from her past poke through. After reading 'A Good Day to be a Dog' and having thoroughly enjoyed that storyline, I had a lot of expectations as someone who weighs plot heavily and I was not disappointed. The premise of the story is exciting and the development (so far) is well-paced. Lee Hye maintains a great balance of romance, humor, fantasy, and mystery (as always) and keeps the readers excited for the next chapter. While the story isn't complete, I believe the webtoon shows a lot of promise and the plot won't be as obvious as it sounds.   Art: 8.5 I'm not the most qualified to rate art but having read lots of webtoons, I have to say the art is awesome, but nothing special. I personally think it's cute and pretty expressive and while there's nothing wrong with it, it pales in comparison to others. Still, unless you're someone who reads solely for pretty pictures, you will not be bothered by this.  Characters: 9.5 Ahh the characters are so enjoyable! Ban Jieum, our female lead, has such a distinct personality and story which still has a lot of room to be explored. She's witty, calm, and intriguing, as expected of someone who's got several lifetimes of experience. I do think Line poorly expressed her personality with the translations at parts but I think they get the point across. In any case, she creates a great dynamic with the male lead, Moon Seoha, by constantly teasing him with just enough that he's annoyed yet interested. Moon Seoha, against his own will, is able to act natural around Jieum, thus developing their relationship smoothly. The progression so far is well-paced and thoroughly enjoyable to read.  I personally also enjoy how assertive the female lead is and how both characters are on an equal playing ground, rather one being more overbearing than the other. It's refreshing to also see them be (somewhat) realistic about their choices and actions. Overall: 9.5 While this comic is not completed, I can hardly see it being developed so catastrophically that it destroys all promise. This webtoon delivers in suspense and comedy, romance and mystery, and has a great balance of genres. Stories that can spectacularly appeal to all aspects are definitely worth a read imo, so please give this webtoon a shot!

I love the mc, I'm invested in the story and I am rooting for the character's growth. I have no complaints a 10/10. This is probably the fastest story to convince me to give a full mark.  The story will follow through our mc who reincarnated a lot of times that she was just about to be bored of it all, but at her 18th reincarnation she finds someone dear to her, despite her being scared of loving again she decides to take a step forward but unfortunately things didn't go as she hoped. So in her new life she decides to overcome all hurdles just to get back to her beloved's side. This is not an all her effor thing, as from the looks of it the ml also has to do his part because her identity is tied to his past trauma, so in order to reconnect both of them has to make an effort to meet up in the middle.

The description didn't look too promising, but I am happy that I read this. The characters and story are unique, refreshing, and well done. The art isn't bad, but it isn't the best art I've ever seen either. I highly recommend this.