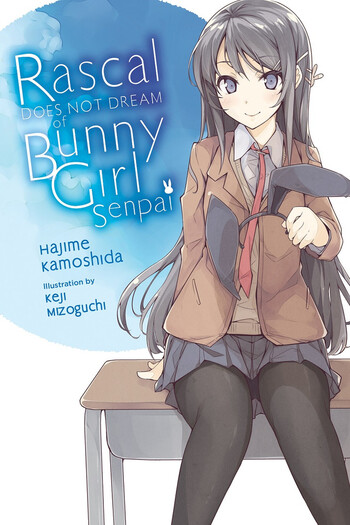 If you're looking for manga similar to Rascal Does Not Dream Series (Light Novel), you might like these titles.

Higehiro: After Being Rejected, I Shaved and Took In a High School Runaway: Another side story Mishima Yuzuha (Light Novel)

Reasons you might like Higehiro: After Being Rejected, I Shaved and Took In a High School Runaway: Another side story Mishima Yuzuha (Light Novel)...

Both shows talk about teenagers dealing with abuse in school or at home, estranged relationships with parents, and not having proper adult guidance to help them deal with trauma.

Izumiko Suzuhara is a 15-year old girl who has been raised at Tamakura Shrine, part of the Kumano Shrines World Heritage Site. She has a strange affliction where she destroys any electrical device that she comes into contact with. Despite being shy, she wants to try living in the city. Her guardian Yukimasa Sagara recommends that she enroll at Hojo High School in Tokyo, accompanied by his son and Izumiko’s childhood friend Miyuki Sagara. While in Tokyo, an entity named “Himegami” appears. Izumiko learns that she is a yorishiro, a vessel for a shinto spirit known as a kami, while Miyuki learns that he is a yamabushi, a warrior tasked with protecting her.

Calendar Tale, narrated by our titular hero, sends us to various earlier points in the story where certain events had yet to occur—when, for instance, the shady “expert” Oshino was still in town, and the ex-legendary vampire Shinobu hadn’t tired of sulking in a corner. Weaving in a motif of ways, paths, roads, and streets—walks of life—the nostalgic vignettes hark back to the “case files” feel of the series-launching Monster Tale, but with a twist. Not all oddities are supernatural: stones and flowers; sand and water; the wind and the tree can just be plain weird without being aberrations. Say hello from the future to class president among class presidents Hanekawa, acid-tongued girlfriend Senjogahara, cheeky lost child Hachikuji, smutty athlete Kanbaru, pathologically shy Sengoku, and justice-loving martial artist Karen, young ladies who love to make our young man sweat.

Kyosuke Kosaka, a normal seventeen-year-old high-school student, hasn't gotten along with his younger sister, Kirino, in years. For longer than he can remember, Kirino has ignored his comings and goings and looked at him with spurning eyes. It seemed as if the relationship between Kyosuke and his sister, now fourteen, would continue this way forever. One day, however, Kyosuke finds a DVD case of a magical girl anime entitled Hoshikuzu Witch Meruru (Stardust Witch Meruru), which had fallen into the entranceway of his house. To Kyosuke's surprise, inside the case is a hidden adult video game titled Imoto to Koishiyo! (Love with Little Sister!)

Our sorry hero, his reformed girlfriend, and the amnesiac class president have all graduated from their high school out in the boondocks, and self-described Sapphist and ex-basketball ace Kanbaru, retired by reason of an “injury,” is starting her senior year. Bereft of the company of her beloved mentors, the only other person around her with any working knowledge of aberrations the junior Ougi Oshino, apparently a relative of the Hawaiian-shirted folklorist, she feels a bit alone and blue, and sick with dread that the devil residing in her left arm courtesy of the Monkey’s Paw might act up again while she sleeps. Investigating a rumor that she fears might lead back to her, the former star ends up peering into an abyss of negativity called Roka—a “wax flower” to take the characters’ meaning. Trapped in a pit the like of which could only be escaped by the one girl who was able to pull off slam-dunks in her basketball nationals, can the penitent Kanbaru, however, still be aggressive?

After time travelling to the past with Shinobu Oshino, Koyomi Araragi meets Mayoi Hachikuji and returns her backpack, which she left in Koyomi's room. That is when they witness something unidentifiable - something that can only be expressed as the 'darkness.' Koyomi, instinctively feeling danger, sits Mayoi on his bicycle and attempts to escape, but the ever-elusive 'darkness' tries to swallow the two of them. They barely manage to escape with the help of the young shikigami girl, Yotsugi Ononoki, and they evacuate into the ruins of the cram school. There, Shinobu tells him that she encountered the 'darkness' about 400 years ago. Then a woman named Izuko Gaen, who says she knows Meme Oshino, explains to them the nature of the 'darkness'... and Koyomi has to face Mayoi's tragic fate.

Just when we thought the darkness menacing the town had been identified, named, and tamed, clear and unclear mysteries of seasons past looming or surfacing, then resolving, not without tears, not without bittersweetness, of course, but satisfyingly, in a tripartite finale, all loose ends tied up into, or at least with, a bow… The End Tale continues—if only for one last time, in a bonus stage for the ages, as our softie of a protagonist who wished for all parties involved, including himself, maturely enough, to end up happy, sees his reflected image freeze in a mirror and regretfully, regrettably, reaches for it to find himself through the looking glass.

To make money, high school student Shinkurou Kurenai works for the secretive Benika as a "dispute mediator," acting to intervene in the disputes of clients – often violently. One day, Benika gives him a much different assignment: to protect Murasaki Kuhoin, a seven-year-old girl from the wealthy Kuhoin family. This turns out to be a more troublesome task than he expects, as Murasaki is spoiled, naive, and completely unaware of what life is like outside of the luxurious one she had previously. He also has no idea why Murasaki needs his protection, though he is slowly obtaining details from a well-informed classmate. Adding to his problems, Shinkurou still must continue to do his previous work for Benika and take care of his social relationships in school while protecting Murasaki, complicating his entire life. Nonetheless, as time passes, he and Murasaki grow close; however, trouble brews in the shadows as everyone - including Shinkurou - seems to be harboring secrets...

Ryuuto Kashima is a gloomy high school student. Because of a punishment game, he was forced to confess to Runa Shirakawa, a girl from the top of school caste and admired by everyone. They ended up going out for the unexpected reason of "Err, I'm free now so..." but, Ryuuto ends up following and eavesdropping Runa getting confessed by a handsome soccer club member, and Runa bringing Ryuuto, whom she just started dating, to her own room as a matter of course. They have different friends and ways to have fun, different in just about everything. And yet, surprised by their differences everyday, accepting it, they begin to relate with each other.