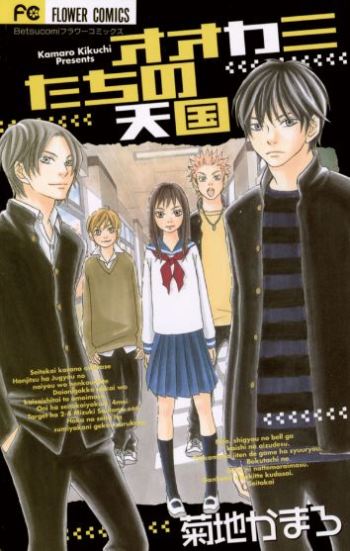 Tsukushi Makino is an average girl who attends a not-so-average school. Populated by an elite and high-classed society of students, the school is also home to the F4 - the richest boys in school who dictate the lives of both the students and the teachers. One day, Tsukushi's friend accidentally falls and knocks over the F4's mighty leader, Domyouji Tsukasa - a boy famous not only for his money, but also for striking fear into any student who looks at him the wrong way. Domyouji doesn't take being knocked over lightly, and when Tsukushi sticks up for her friend the F4 declares war. With the whole school now against her, Tsukushi works hard to show everyone that she is a ‘weed' that will no longer be trodden upon!

This is totally this aleast the first story the sudent council can do what ever they want because of the huge amount of money they donate what the heck this is totally it.

Tanakamori Asami, 16 years old. Because of her father’s debts, she’s forced to transfer from her elite school to her current one… Her new school is entirely full of strange people, in fact it’s kinda like a zoo… But there, she meets the beautiful Akira. Thanks to the charismatic Akira, Asami slowly, slowly she gets used to her new school. However several trials appear to Asami such as her family's finances, her classmates, and even in love. Her everyday life is bursting open in this romantic comedy!

Himeno transferred to a former boys' school, Hallelujah. The president of the students association, Gao is an extreme misogynist, and the relationship between the two becomes intense.

Ritsu is a normal high school girl, who everyone thinks is cold. One day, she met a weird looking guy by chance, who turns out to be the new transfer student...but for what reason is he there? And why is it that she can't help but care for him?

After transfering from an elite girls school, Haru, by her expression and manner, is seen by many as an 'Ojou-sama'. But in truth Haru really is a countryside chick with a fierce attitude! Though she tries not be discovered, she is seen in an unlikely situation by none other but a classmate, Nagase! Thinking she is done for she tries to ‘beat’ her way out of the situation but instead Nagase…?!

Eri was being harrassed on the streets by her ex-boyfriend Yuji. Out of nowhere, Kei came to her rescue but then he suddenly forced her to kiss him!! Ever since that day, Eri has not been able to forget that passionate kiss. One day, Eri met Kei again at her workplace. Unknowingly, Eri fell in love with him...!!

My brother came to our house, I'm so happy! But even he doesn't even want to be in the same room with me nor sit next to me on the sofa... Though I'm doing my best! Am I that strange? You know, brother, I'm your sister! But it's so painful...I can't tell you that I love you!

Ariko is being confessed to by a cute boy named Yukinari. He is adorable and earnest, but Ariko turns him down. Why? He is a transfer student, and he's only been there for ten days! He obviously doesn't know her well, and it's obvious when he mentions how small and cute she is. She is just the opposite. She can beat up people bigger than her, and she isn't afraid to defend people getting bullied. Despite that,he thinks she's great! How can a normal boy like him match up with such a strong girl?

Hana-Kimi: For You in Full Blossom

Mizuki Ashiya is a teen Japanese girl growing up in the USA. After seeing Japanese track star Izumi Sano on TV one day, she became instantly enamored with his grace and style, and became determined to find him and confess her love. She's able to transfer to his all-boys school by hiding her feminine identity, and finds herself as his roommate in the process. However, while the rest of her classmates simply suspect she's a very girly boy, Sano sees through her façade in time, and together they must try to keep Ashiya's true gender a secret. Now, Ashiya must not only try to confess to the man she loves, but also help him work through his personal issues and keep her secret safe from the school in the process!

Ever since they were born, the twins Maria and Noel have always been together at school and home. But when Maria falls in love with a boy and transfers to Morinomiya Junior High Boarding School without telling him, Noel is angered that another guy could come between them and decides to follow his sister and enroll at Morinomiya himself. However, there's a catch: with only one vacancy remaining, Noel will have to live life as a girl and stay in the female dorm! Now Noel is living as Maria's twin sister, much to her disgust and annoyance, and is making her life as difficult as possible. Between his friendship with the most popular sophomore in the basketball club and worrying about his roommate Miyu, will Noel still be able to achieve his goal and bring Maria back home?