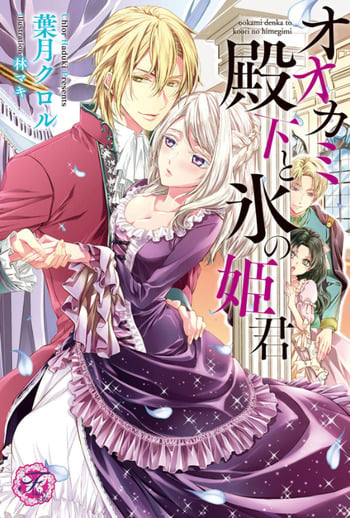 If you're looking for manga similar to Ookami Denka to Koori no Himegimi (Light Novel), you might like these titles.

A poor baron daughter lived under her sister’s shadow, where none was for her. Her hair is full or hairballs, she doesn’t have a single dress, and all she has are tattered clothes for work. Her sister got the attention of a high rich noble but died on the way to her marriage. Marie was sent as a substitute bride for her sister, because the baron couldn’t repaid the already sold dowry to the Earl. But… that’s impossible? In the first place, the proposal was a misunderstanding? A beautiful and happy story of love about a fallen baron’s daughter and an eloquent Earl.

Can Someone Please Explain What's Going On?! (Light Novel)

If you thought regular marriages were insane, wait until you see the contract Viola signed! Our heroine, the daughter of an earl, signed herself away in a marriage contract to an aloof duke, Cercis, in order to save her family from a lifetime of poverty. All of a sudden, Viola's life is turned upside down when she moves into the Fisaris family's manor and is left to negotiate her new life as a "show wife" in a world she had only ever caught glimpses of before. How will she shake things up at the Fisaris estate?

The Lady and the Beast

Following a life of bloodshed and heartbreak, the great Empress Martina is reborn as Astina, the genius daughter of a humble count. But her peaceful world is shattered when bankruptcy forces her father to marry her off to the dangerous Archduke Atalenta. All of high society knows him as "Terriod the Beast" because of a family curse that turned him into a wild monster. Luckily, even the deadly beast of Atalenta is no match for the former empress's mighty sword. Everyone is shocked when the new archduchess tames her husband all too easily and takes over as the family head. No one's more surprised than Astina, however, when her casual kiss returns Terriod to his human form. Not only does he resemble her past life lover, but he has no memory of her from his wolf days. Despite these awkward circumstances, can the new power couple join hands to rule over the archduchy?

Left with memories of a past life, Ewey was born into the Artisan noble family of Nylle. However, after it was determined she did not possess the ability to make "Divine Protection Embroidery", she was exploited and spent her days in a living hell. By chance, she was picked up as a seamstress by the kind-hearted nobleman, Kalosthylla Roden. Grateful to Roden, she used the "Divine Protection Embroidery" she'd never shown her family, and made him a sachet as a present. Adding in the power of the "Spirits" she'd always interacted with, the sachet she finished became an item on the level of a national treasure, and Ewey's life takes yet another welcome turn.

Altina who's fond of books starts pretending to be a mute in order to escape the imposed image of her as a "perfect lady" role that's set-up by her older brother and older sisters. However, that being said, that pretend act will soon be discovered by no other than the head librarian, sir Shijar himself?!

Elizabeth is devastated, her engagement was broken with the exact same lines as the scene in The Holy Maiden Makes the Stars Fall in the Night Sky, a popular novel among the nobility. Just as she’s about to explode in anger at the villainous heroine grinning beside her, the crown prince turns around and begins to denounce the heroine actions against her? Actually, everything is in the palm of the Prince’s hand.

Claire, the daughter of a Duke, was supposed to be the best magician in the Kingdom of Noston. However, the one who awakened extraordinary talent was Claire’s sister, Charlotte. As such, Claire lost her place and had to part from her own homeland. It was then when a fateful encounter happened: Claire met with the almighty Kingdom of Paft’s First Prince. It was a story that followed the path of precious friendship.

“As if I’d marry an ugly woman like you!” Monette, a noble daughter of the House of Idira, was hurt deeply by what her fiancé, Prince Alexis, had said. To rub salt on the wound, her younger sister was then made Alexis’ fiancée instead of her. Unsure just what part of her was ugly, Monette develops a complex… and begins to cover her whole body with iron armour. And so, Monette researches magic alone in the old castle… until one day, two men come to visit her… “Monette, break my curse!” This is a story of Monette, who wears armour from the top of her head to the tip of her toes, Prince Alexis, who suffers under a curse of bad luck that forces him to stick his foot in a bottomless swamp at least once a week, and Percival, a worrywart knight who spoils people when he’s tired...