No Need for Tenchi! - Recommendations 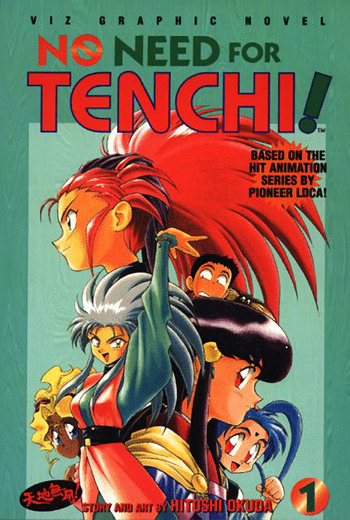 When Lina and Gourry pursue the priceless Crystal Goddess statue, they try to outsmart the notorious Black Fox, only to have this dangerous outlaw fall head-over-heels in love with Lina. After escaping the Black Fox's unwanted attentions, Lina plunges them deep into palace intrigue when they pursue the treasure of Prince Brochion. Then it's Gourry's turn to lead them into trouble when he gets kidnapped by the smitten princess Isabella.

Both have similar art, funny characters that are a joy to read the story of, and both series have a similar character and humor driven narrative. Both Slayers and Tenchi Muyo are staples of the classic 90's anime art style, so if one catches your eye aesthetically, the other just might as well!

ES members Eclair and Lumiere once were involved in a battle to decide the fate of the galaxy. They prevailed and peace was restored to the galaxy. Now, several years later, the galaxy once again stands on the brink of chaos. This conflict will see the dawn of two new heroines; Ascoeur and Q-feuille.

The Girl Who Leapt Through Space D

The story centers around Keiichirou, a young man who lives alone in his house. He went through a lot of pain in his life, ever since an accident that happened three years ago. One rainy day, he finds a little girl, drenched from the rain, inside his home. She is named Flower, and so begins the life for these two unlikely protagonists.

Join the hotblooded young man Sena Arata as he enrolls in Kamui Daimon Comprehensive Academy - where all the best LBX players are gathered - and embarks on his journey to become the number one LBX player in the world! Hikaru, a beautiful boy who, when it comes to things other than LBX, from the bottom of his heart could not care less. Haruki, the hot-tempered Mom to the idiots of the first platoon. Sakuya, mechanic and the heart of the first platoon. Houjou Muraku, the genius feared among LBX players as the 'Violet Devil'!

Someday, the five of you will be put into terrible danger. And when that happens, you're the only one who can protect everyone. Daisuke Dojima, a 2nd-year student in high school who was kidnapped when he was younger, experiences a strange phenomenon along with his friends Gai, Lu, Marimari, and Keisaku: “Shibuya Adrift”. The center of the city of Shibuya is transported more than 300 years in the future. The people sent with it find nothing there but vast wastelands and forests, dotted with ruins… and hostile beings called “Revisions” that control massive mechanical monsters. The children fight the “future” to bring back the “present”. No matter what, they're going home...