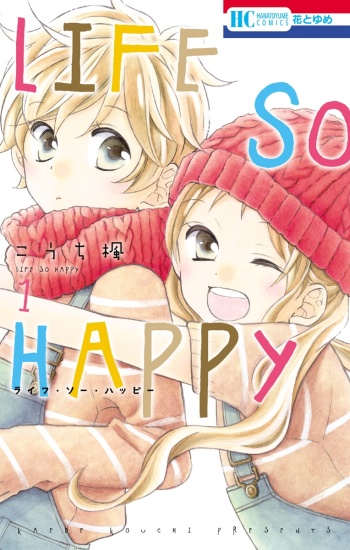 Remember Love so Life? Ever read Love so Life? Well this is the after story. It focuses on the twins who are living with there grandmother and father now and have grown up quite a bit. So read this after you finish the main story.

The story is enjoyable, it is nice to see how the twins have grown up and how much they learned from Shiharu/Matsunaga and the grandparents & father also. The ending is funny but, just kinda leaves you wanting that last bit finished but, there hasn't been an update since the last.

What makes me feel a little less connected to this half of the story is it feels like they downplayed some areas a bit. In example they addressed Aoi's little crush from the original story but, at the same time they downplayed it by having all the characters not even realize it after the wedding for Shiharu/Matsunaga was announced. (Yeah he is a kid but, the little guy has feelings and his attachment to her should be addressed in a way that wouldn't make him feel like it didn't matter.)

Either way worth checking out but, read the main story first or else this will be confusing as it doesn't offer any backstory and just dives right into the story.

This was so sad and emotional,

being that it made the plot a little difficult to follow, and messed up some of it, but that's just wha type of manga it is! Because it was so sad, which is sometimes cute, but a little too emotional that i had to spot to take a break at some points, i had to duck down a star.

The art is super cute and made me feel so warm!

The story was repeated continuously, as it couldn't make a descision whether or not to focus on the romance or the twins. The cuteness of the twins and the same reaction every, single, time made the story a little old and over-whelming.

The romance between the two really perked up at the end, and moved very fast, considering the twins ended short, and the groups relationships especially with the siblings took forever to complete, and when it was supposed to bounce back between the two every so often, it did not as it was left out, with only minor hints in the manga. Yes, it was 5 years that they waited, but did we see it? No.

The bond between the girl (i forgot her name if you haven't noticed) and the twins drift off from doing so well to taking a U turn SO QUICKLY. The twins just LEAVE. Many including myself can say we were disappointed. Though happy that the dad was back, as some considered a burden to the brother, the brother did not mind it and wanted the twins to feel the love her never recieved, including riding a bike for the first time with a relative or close person. The girl did not want to let them go as well. I wished that the relationship grew more between the couple, and that they'd adopt the twins together. It didn't happen and i was a bit dissapointed.

The girl and the boy at the orphanage, i believe his name was Natsu, well, the relationship was never really looked at and observed, as the boy should've had a chance, cast aside so fast.

This cute and emotional story needed some work, but it was alright. Should you read 100+ chapters of this? No