Alt title: My Fiance is in Love with My Little Sister (Light Novel) 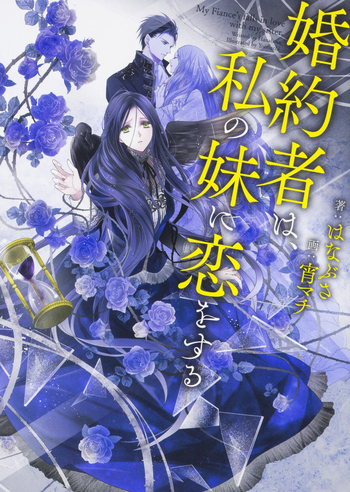 If you're looking for manga similar to Konyakusha wa, Watashi no Imouto ni Koi wo Suru (Light Novel), you might like these titles.

Catriona Julie Grande, the daughter of a marquis, was the Crown Prince’s fiancee. She was executed under false charges but went back in time. All she wanted was to live her life peacefully and prevent the same tragic fate from occurring again. But one day, the Prince appears in her life again and everything begins to fall apart. She has no idea what to do.

Villainess Lupina is cursed to relive the last week of her life in a countless loop. Drowning in sorrows and regrets, she is constantly being abandoned by the prince. However, one day, she’s guided by a mysterious voice and time rewinds to her childhood. On that fateful day, her life took an unexpected turn...

If you think being reincarnated once is a big deal, try seven times. From lowly pharmacist to embattled knight, Rishe has lived many lives. This time around, she’s determined to live in the lap of luxury–but there’s just one catch. To make her extravagant dreams come true, she has to marry the prince who killed her in one of her previous lives! It’s going to take every one of the skills she’s honed over multiple lifetimes to accomplish this goal!

I Swear I Won’t Bother You Again! (Light Novel)

Succumbing to long-simmering jealousy over her younger sister, noblewoman Violette snaps and does something terrible. As she languishes in prison, something unexpected happens: time is rewound, sending her back to the day she first met her sister! Armed with the memories of her disastrous first go-round, Violette is determined to take the script in a different direction this time.

On death’s doorstep after being stabbed by an assassin, the one thing Idris is sure of is that she doesn’t want to die. Her fate seems sealed until her husband Khalid, the terrifying archduke of Caltes, makes a cryptic promise to save her life. That’s when Idris wakes up a year earlier, on the day of her wedding, with a chance to redo it all. But while she’s grateful to be alive, her memories aren’t adding up. The Khalid she remembers was a ruthless tyrant, but the man before her now is affectionate and kind. Was their loveless marriage just a horrible dream or has Idris’s past become twisted in reality? She has no choice but to trust Khalid’s heart if she wants to survive and find out who tried to kill her.

I Can’t Keep Up With My Stallion Duke

Not a single soul in Olivia Florence's life, including her own husband, provided the warmth that she craved, and she lived her life alone, growing strong. Waking up two decades earlier right after her regretful arranged marriage to the Duke, Lord James Parnell, she plans to live a different life. She hatches a plan to anull her marriage and remarry another Duke, Ian Tyrone, infamous for being "IMPOTENT for never showing any interest in bedding the ladies. Maybe his disinterest in women would allow Olivia to comfortably live as his wife, unburdened by childbirth and free of any other pressures in life. But wait, the Duke who seemingly "couldn't get it up" turns out to be a complete stud at in the bedroom. What has Olivia gotten herself into?

Can We Become Family?

Adopted from a poor, rural orphanage by a wealthy duke, Naviah Agnus wanted nothing but to win her new father’s heart. Despite her best efforts, the calculating Duke only sees Naviah as a pawn, a mere stand-in for his terminally ill daughter Vivian, who was set to marry the crown prince. But when Vivian miraculously recovers, Naviah is pushed aside and driven to her own death. When she wakes up, she is 8 years old again, but this time, Naviah is done playing nice. Can they ever really become family?

My In-Laws Are Obsessed With Me

Pereshati Jahardt is a count's daughter who got remarried after her mother’s passing. When her father died, he left her all his fortune. Then, Pereshati's greedy stepmother and stepsister conspire with Pereshati's lover to kill her. However, under mysterious circumstances, Pereshati is brought back to life and travels back in time before her murder. To buy some time before getting her revenge, Pereshati visits the handsome yet notorious grand duke, Therdeo Lapileon, to marry him. During her visit, she uncovers a horrifying secret of his family. How will Pereshati deal with it? Will she be able to take her revenge?

The curtains rise on the tale of a young lady who once stormed the battlefields now getting to start her life all over again! The young noblewoman, Jill, was sentenced to death by her fiancé, the Crown Prince. Just as she was on the brink of death, time rewinds back to when she was 10 years old, to the party where her engagement had been decided! Determined to avoid going down the same path to ruin, Jill hastily proposes to the person behind her, only to discover that he’s none other than Hades, the Emperor of the neighboring kingdom who’s (set to) fall into darkness, ergo the worst villain.

No More Turning a Blind Eye

Ophelia Heavenwalker dies a pitiful death, succumbing to a mysterious illness at the exact moment she witnesses her husband’s infidelity. So when fate gives her a chance to redo the last three years of her life, she decides she’s done being a doormat. She’s taking back her name, taking back her estate, and taking back her life! Now’s the time for Ophelia to enjoy her independence and budding romance, but will that be possible with her failing health and spiteful ex-husband still in the picture?