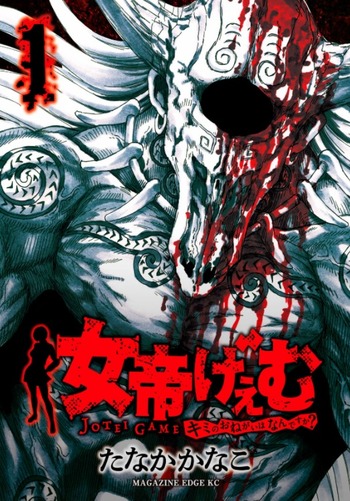 If you're looking for manga similar to Jotei Game: Kimi no Onegai wa Nan desu ka?, you might like these titles.

Viewers participate in a heavily advertised new quiz show where the winner earns one hundred million yen. But waiting there is a cruel game of death and competition. What will be the fate of the ten finalists? And just what is the true purpose of the quiz?

Forty-two students at Shiroiwa Junior High School were brought to an island to participate in 'The Program', a television program that pits an entire class against each other in a brutal fight to the death. In the midst of the chaos, five girls avoid the fighting by holing up in a lighthouse, where they meet their eventual violent fates. There, Haruka reflects on her feelings for her long-time friend and classmate, Yukie; and Chisato tries to find Shinji, a boy she's in love with, while she remembers the situation that bonded them together.

Hyun-Woo, Ai Sol and Nuna are three strangers who must band together to survive. They, along with other players, are forced to kill each other in a survival game on a deserted island, only to be continually revived by their bracelets. Who will emerge the victor?

What happens when you combine pirates with some sort of Battle Royale? You get Dead Flag. An entire class has been selected to participate in it. They have ten days to rack up the most points by plundering, looting, and murdering. The top thirteen individuals win Dead Flag.

You can't leave this island until you've killed 100 people. The most deadly survival game begins on a solitary island where desires swirl and only the strongest survive!

Harem Royale: When the Game Ends

Kohinata Asanaro is your regular everyday high school student. He likes light novels, porn games, and fantasizing about the girls in his class. One day when walking home from school he inexplicably releases a demon from a sealed bottle. Her name is Zepafur, and she won't rest until her debt is repaid! "Now begins the Lovey Dovey Harem Royale!" cries the demon, weaving a most curious magic. As a result, Asanaro's regular high school life transforms into a love-comedy series of harem shenanigans, with four girls from his school all vying for his affection, wow! But... Unbeknownst to our dopey protagonist, the four girls are in the midst of a horrific survival game under threat of death and eternal torture. She who fails to capture Asanaro's heart will be confined to the depths of Hell and killed ad infinitum! Just who will survive? Who will thrive? And who will meet their demise?

A class of junior high school students is taken to a deserted island where, as part of a ruthless authoritarian program, they are provided arms and forced to kill until only one survivor is left standing.

A group of 15 elite high-school students are gathered at a very special, high-class high school. To graduate from this high school essentially means you'll succeed in life, but graduating is very difficult. The school is presided over by a bear called Monokuma, and he explains to them that their graduation hinges around committing a murder. The only way to graduate is to kill one of your classmates and get away with it. If the other classmates discover the identity of the killer, the killer is the only one executed. However, if they fail to catch the killer, only the killer graduates and the others are annihilated. Which of the 15 will survive the bloodbath to come?