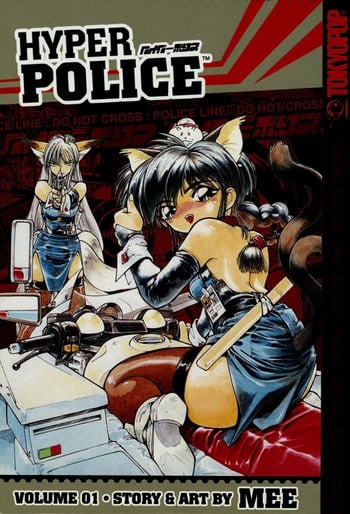 Welcome to Bokuto Station, situated in the Bokuto precinct of Tokyo and home to the Traffic Department and its hard working staff, who have a mission to uphold law and order. Meet Miyuki and Natsumi, the top dogs of the precinct who are quite the opposites: one is quiet, timid and skilled with mechanics, and the other is loud, outgoing, strong and clumsy -- but they make one hell of a team. Follow the duo and the rest of Bokuto Station's staff in this lighthearted police drama where each day is a new and exciting event, and upholding the law might mean more than you'd think...

These are both about the wild antics of some female police officers, and the two shows feel a lot alike.

Both of these shows are about the comedic adventures of a group of unique police, who often cause more damage than the suspects they persue.

In the not-too-distant future, Tokyo has become a city of chaos riddled with crime. From this chaotic mix comes a sexy by manically hilarious bounty hunter named Emi Rashomon, a.k.a. Bomber Girl, who often gets so enthralled in her work she ends up killing the criminals before collecting a bounty!

One day, the typical Sunao Moriyama found something not-so-typical in his refrigerator: a small creature between the potatoes and mayonnaise that he dubs Potemayo! Sunao decides to take care of Potemayo and takes her with him everywhere he goes, and as a result Potemayo quickly becomes popular with Sunao's classmates. However, the tranquility of the new friendship is broken with the arrival of another creature from Sunao's fridge – this time a scythe-wielding laser-shooting horned creature he dubs Guchuko. Now, every day brings new adventures and surprises with Potemayo and Guchuko around!

Welcome to Wild 7, a wild tale about a group of bandits commissioned by the Japanese government to eradicate any and all potential threats to the status quo. Read as Hiba, an incarcerated felon, gathers a group of outlaws to form and lead the group known as Wild 7. See as this bunch of ruffians try to overthrow a corrupt politician. Using crooks to fight crooks, you say? Fighting fire with fire is a good thing? Finding the good in the bad and the bad in the good is possible? Let’s see what happens…