How to be Good - Recommendations 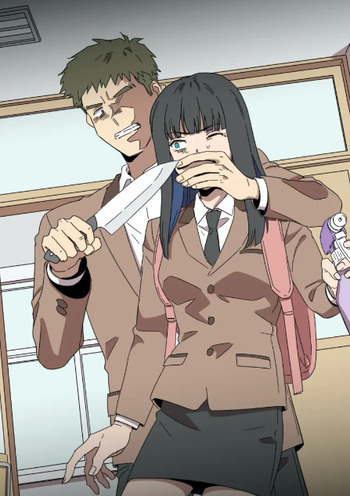 The Queen: A Silent Classroom

A queen with an entire class in the palm of her hand, striking fear into the hearts of her subjects with a single glance. 'This is wrong,' they think to themselves - 'This is not fair. We are all equal.' - so why is it that not one of them speaks up? If silence is our answer to tyranny, then who will help the helpless?

Day after day, honor student Hwang Dong Wook gets called out by the bullies in his class to serve as their punching bag. Day after day, the last-ranked student Choi Yool is shunned by her classmates because of her beauty and her grades. As it happens, the sullen boy and the carefree girl sit next to each other in class. When the top student is asked to lure her into the bullies dirty shemes, their lives take an unexpected turn...

The story of junior high school students new outlook on life. It's an inspiring tale of the many issues in our modern society. And the undue pressures of society to conform their standards instead of being yourself. For those who dealt with issues such as bullying, weight, and appearance.

A former special forces agent is on a mission to kidnap the daughter of a shady company's CEO.

5 criminals with the perfect plan ends up kidnapping the wrong girl, and is contacted by a mysterious person who invites them to play a deadly game. Will they be able to find out who betrayed them?

Kidnapped by her ex-boyfriend, only the stalker is in the know! The fitting model Ju Yeon, who had just emerged as a star on social media, wakes up to find herself tied up in a dark school. Her kidnapper, a man named Nam Woo, is her ex-boyfriend. Ju Yeon had just reached a turning point in her life. But while she was being threatened by her ex-boyfriend at that moment, Ju Yeon's stalker, Park Su, was watching the two while keeping his mouth shut inside the shadows!

Doyoung's life as he knows it starts to turn upside down with the kidnapping of his sister, Dohee. With his psychometric ability, he finds out that the people who kidnapped his sister aren't normal humans and that there are many others with special abilities like him...

Praised solely on her looks for years, Lia was eager to put everything behind her and start anew… Until she got kidnapped and tossed into the harem of an unknown ruler. Desperate and afraid, Lia makes a deal with Karian, the handsome yet ruthless regent to the king, who seems strangely drawn to her. Will Lia be able to keep up appearances as Karian’s concubine long enough to search for the hidden assassin in their midst? And once she does, will that be the very leverage she’ll need to make her escape?

Looking for a Father

Hyun-Su Jung (29) was scammed by Jung-Mi Kim and is now in debt of 900,000$. He is being chased by loan sharks and ended up kidnapping Jung-Mi Kim's daughter, Ha-Yeon Lee (17). But when Hyun-Su Jung calls to ask for a ransom, Jung-Mi Kim tells him she doesn't care about what happens to her daughter and hangs up. What will happen to the kidnapper and his victim?