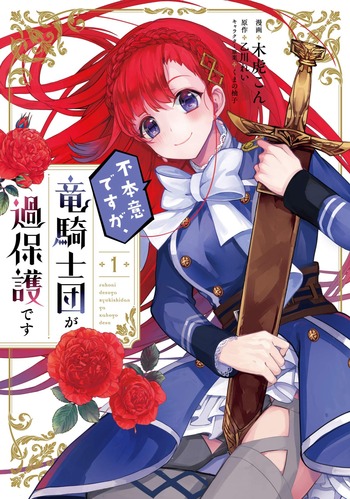 If you're looking for manga similar to Fuhoni Desuga, Ryuukishidan ga Kahogo Desu, you might like these titles.

Koisuru Ouji to Junan no Himegimi

Mira falls off from a tree but before he reached the bottom, Prince Alex saved him! Prince Alex has been searching for his lost love and Mira looks exactly like her! Prince Alex is convinced that Mira is his lost princess, so he insists they take a bath together! However, he is disappointed when it turns out Mira is really a man. But that won’t stop Alex from loving him and trying to find out the mysterious past that Mira holds!

Elizabeth is devastated, her engagement was broken with the exact same lines as the scene in The Holy Maiden Makes the Stars Fall in the Night Sky, a popular novel among the nobility. Just as she’s about to explode in anger at the villainous heroine grinning beside her, the crown prince turns around and begins to denounce the heroine actions against her? Actually, everything is in the palm of the Prince’s hand.

In a certain empire, the young emperor's workroom has a ceiling space that is full of secret agents from many of the empire's member countries. They all wear masks, but they get along as friends while they peacefully keep surveillance on the emperor. One of these secret agents is a young woman, who is less than a year from her 18th birthday. She receives word from her home country that she is to be transferred, and that she will become some noble's lover. However, when she arrives home, she finds the situation is a little different. The emperor himself has come to fetch her, and he intends to make her his empress. To her surprise, he is actually someone she knows, a man who was sometimes among the masked secret agents! Now she will enter her new 'post,' and see if she can make it as a future empress!

When she was a baby, a fortune teller foretold that Yin Cuidie would bear a son who would become the emperor. And so Yin Cuidie received training from a young age to enter the Imperial Court. Cuidie had her sights set upon entering the Emperor’s harem, but found herself married to the Emperor’s younger half-brother, Gao Bingxi, instead. The Prince of Lüshou, Gao Bingxi, is the black sheep of the Imperial Court. Yin Cuidie and her family were dismayed at her unlucky fate! Gao Bingxi had to travel far away shortly after his nuptials and Cuidie’s parents advised her to use the opportunity to seduce the Emperor and enter his harem instead. Gao Bingxi returned and learned of this plot. Even though he loved Cuidie, he challenged her to a wager- that if she could find herself in the Emperor’s bedchamber in six months, he would divorce her so that she can pursue her dreams. Will Cuidie achieve her goals? Or will Bingxi convince Cuidie to fall in love with him instead?

Via, the fourth Princess, was impatient as the royal palace was busy fighting for succession. That’s because the lewd emperor implied that he wanted her to be his concubine. Via lived unobtrusively in a sickly setup, but even as she stays still, things just get worse. Therefore, she decided to offer a time-limited concubine contract to the next emperor, the first Prince Alex. With her fragile beauty on the outside, but her strength and intelligence on the inside, Via charms everyone around her and wields the Prince of the great power. This is the story of the life of the unconventional Princess Via!

“Liz Bertrand is an arrogant and selfish young lady, she’s nothing but a “villainess”!” Liz, who came for a marriage meeting with Alan, the first prince, was shocked to hear of what Alan’s younger brother was telling him. “What is a villainess? I’m nothing like that-!” However Liz paled as she recalled far too many times where she had acted egotistically. Then, Alan appeared in front of the teary-eyed lady, “Shall we work hard together to prevent your fate as a ‘villainess’?” He proposed. While being dazzled by the prince’s sweet guidance, Liz struggles to become the perfect lady!

Clare, the second princess of the Faitnum Empire, is said to be a failure. However, what awaits her there is a warm welcome from the entire country, and she is treated extremely well as the consort of the crown prince! She is a "living woman of knowledge" who boasts unparalleled intelligence, and she is the one the people of the kingdom have been waiting for!

Olivia, a duke’s daughter, is ordered by her father to serve as the queen's maid of honor so that she can become a bride candidate to the kingdom's Prince Leonard. But everyday she was harassed by the queen and the princess--?!

It is mid-spring in the country of Brior. Olivia, a duchess, pretends to be a fool under the order of her fiancé, the crown prince, Alan, and suddenly, he tells her that their engagement has been annulled. Olivia was stunned, but she was even more confused when the second prince, Cyrus, suddenly appeared in front of a large audience and asked her to marry him.

A sickly girl is reincarnated in another world as a princess. However, she is looked down on as she does not possess any type of magic. Her purification ability awakens just in time a hero is summoned from another world. Feeling needed for the first time, she starts to fall in love with him... but, for some reason his attitude seems cold?