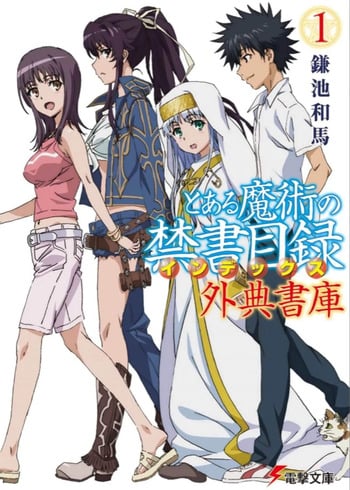 If you're looking for manga similar to A Certain Magical Index: Apocrypha Archive (Light Novel), you might like these titles.

Petrograd, Russia, at the turn of the twentieth century. Throughout Europe a vampiric menace stalks the streets: Chiropterans - incredibly strong, inhuman monsters. A new organization of vampire hunters named Red Shield battles to stop the beasts, but they are outnumbered in the face of the superior might of the creatures. All that stands between the creatures and the end of humanity is a lone girl - Saya! This first of two novels will explore the history of the Chiropteran menace, how Saya and her enigmatic mentor Hagi first met, and the inner secrets of the Red Shield organization.

When a Nazi lieutenant is sentenced to death for war crimes, he expects to escape with his life, but hubris is his downfall. A female android marries for love but is soon lost, and she must deal with the consequences. After a married man finds out his city is being experimented on, he tries to save the people while struggling with adulterous thoughts. On a dark and lonely road, a cabby picks up a shady man who threatens him, but little does his passenger know the cabby is not as he seems. An educated man falls in love with an elusive woman who has a life altering secret. American school kids learn the cruelty of war. A revolutionary fails his revolution, and an interstellar peace conference does not yield the hoped for results when space hippies defy peace conventions.

Tsubaki Kamui is the granddaughter of a prestigious antiquarian. A mysterious man named Sena Takuto asks for an appraisal on an artifact, one that he stole in order to prove that he is the grandson of the Grand Duchess Anastasia. Is this thief really descended from the house of Romanov? Will Kamui help him?

On the eve of the Russian Revolution, our favorite Chiropteran-hunting duo masquerades as members of Tsar Nicholas Romanov's royal chamber orchestra. Saya begins to uncover some of the strange secrets of the Romanov royal family and, of course, finds some hideous Chiropteran beasts who are doing a little masquerading of their own. Despite being one of the Chiropteran "originals," Saya's devoted her life to eradicating the wilder, more vicious Chiropteran spawn who prey on humanity, and this short series embraces the same mix of action, humor, and horror.