The World God Only Knows: Four Girls and an Idol - Reviews 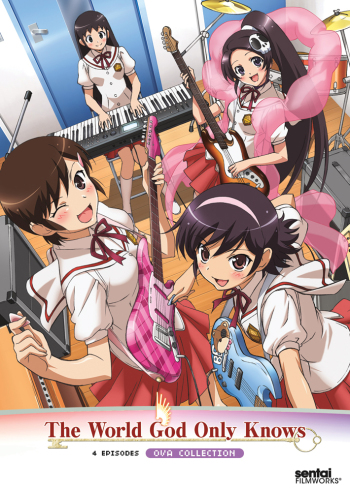 To label this an OVA is somewhat of a copout, by all means this was just a filler episode left out of season two.

Elsie and a few of Keima's past conquest decide to start a band. After realizing that studio time is expensive, and that they can't bring food in with them, they decide it would be best to instead try to make a school band, so they can take advantage of the school's resources. In order to get Mr. Kodama's approval to start a club, the girls all agree to his demands, ace the big exam.

Enter Keima. Being that the girls aren't all the great at school, Elsie think's it's best to bring in the smartest person she knows to tutor them, her big exalted brother. Lucky for him once the girls were able to be freed from their loose soul they forgot all about their time with him. Well except for Kanon, who's starting to wonder where she knows Keima from. (Completely ignoring the fact that she may know him because they are classmates.)

Again, being basically an episode dropped from the series, everything matches exactly. I think there was only one or two little cuties gags, so they at least toned that down for this one off.

The OVA, like the previous two series, also had decent opening and closing animation. The first was a little weak on the concept, but still was animated very well and the second felt like it was a nice little music video for the girls band.

While the music used for the opening and closing credits wasn't as good as the first two series, it was pretty good none the less.

And while the in show music wasn't great, it was meant to be that way since the girl's band is just, well terrible.

One bone of contention this time around was that they reused Cynthia Martinez, the voice of Ms. Nagase, for Chihiro. (the third voice actor for this character) She had such a distinct voice and didn't even attempt to alter it for this character.

There wasn't a single new piece of information provided about any of the characters, well except the fact that Elsie has no idea how to play an instrument.

This was a fun little one off episode that I assume will play in later, as they mentioned playing at the spring festival as a band, so I suspect that will be an episode somewhere in season three. But that will have to wait till after the next set of, hopefully more useful, OVAs