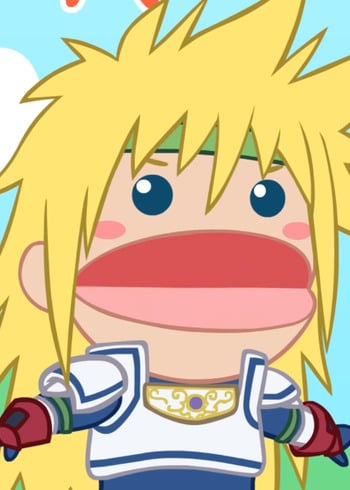 The Legend of Zelda: Link's Hijinks

Follows the misadventures of Link and his efforts in avoiding his responsibility of saving Termina. Just moments before the Moon crashes into the land, Link uses the Ocarina of Time to turn back time- but only so he can keep playing on his Nintendo 3DS. Tatl introduces Link to masks in an attempt to get him to stop, but this backfires when he plays with the masks and forgets all about the Moon.

Chroma are bounty hunters for hire that deal with all manner of requests, including monster subjugation. A thirteen-year-old girl named Marona lives on Phantom Isle after losing both of her parents at a young age. Her parents had lost their lives during their jobs as Chroma and now she must become a Chroma to earn money. However, work as a Chroma is difficult and many hold her in disdain as the 'Cursed Girl' because of her ability to talk to and manipulate phantoms. Thankfully, she's not alone since she has the help of the phantom named Ash, a friend of her parents that had died alongside them in a mission. Marona's parents' dying wish for Ash was to have him protect their daughter. Now Ash does everything he can to help defend Marona from the hardships of the world.

The peril-plagued Princess Toadstool is kidnapped by the diabolical deadbeat Bowser but super plumbers Mario and Luigi hatch a plan with their new friend Yoshi to rescue her. Are the Super Mario Bros’ plans a pipe dream? Can they stop the Koopa King before he forces the Princess to be his bride?!