If My Favorite Pop Idol Made it to the Budokan, I Would Die - Reviews 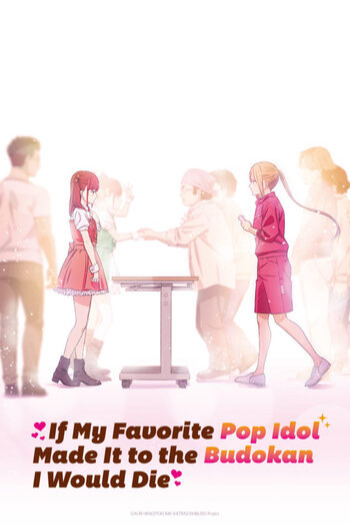 Well, tons of potential here but a LOT of it was wasted. I don't know how the people making anime are going to realize that screaming is not funny, it's annoying. Please stop with that. The lead character was probably the worst part of the show because of all the screaming and quite frankly, down right unhealthy stuff she got up to. Overworking herself, never saying things properly to the person she admired so much, actually tearing her throat by screaming, spending ALL of her money on merch, breaking bones etc. I have no idea how a lifestyle like that is sustainable. That girl actually managed to eclipse all her good traits by going so overboard that it was just frustrating. That's probably why I think the show would have been better off focusing on the idol group and not the otaku fans.

The members of the idol group actually had a very entertaining dynamic among themselves. There were even GL pairs hinted at with one being possibly confirmed. Because of that I'm inclined to be lenient to this show but I just can't excuse the screaming. All of the girls had beautiful character designs and the animation was adequate most of the time and stunning sometimes but I was expecting better from the final episode to be honest. I could also do without all the bright glare that these recent cute girls anime have been so obsessed with when it comes to the visuals, it hurts my eyes.

The story on the whole left a lot to be desired and this is where most of the aforementioned lost potential comes in. Things don't really progress in any significant way, especially in terms of the otaku fans. I have no idea why Eri couldn't just talk to Maina outside of the photo ops and handshaking sessions. They even ran into each other multiple times outside of those but all those opportunities were squandered. There was even one time with something Eri sent to Maina which was lost by the staff, that had a lot of potential to drive the story but it was just abandoned right away. Things involving Eri were mostly frustrating to be honest and took away from rather than add to the enjoyment of the anime.

I still look forward to the characters in the idol group moving forward and growing. They were all very likable and I'm quite invested in their development and goals. I hope we get another season and it delivers on those aspects hopefully with a lot less screaming. Speaking of which I hope Eri gets up to a healthier lifestyle and actually shows some growth. I'll be sure to check out the manga as well.

All things considered, I'd recommend this mostly because of the idols themselves.

I'll try to be brief and simple with this review. If My Favorite Pop Idol Made it to the Budokan, I Would Die (what a monster of a name) has good animation, but in general it's lacking on so many levels. It recycles the same jokes and absurdity constantly. It doesn't really show any character Or plot development aside from tiny accomplisments. Maybe they were going for that feel-good style where nothing is too serious and it leaves you feeling happy or light. But it just didn't work for me at all. And despite the slowness of this anime, it sure has a lot of shouting and loudness.

The character designs and style is incredibly cute, though, which made me want to watch the whole thing. But other than that it really makes you question if you have anything better to do than to watch this. It constantly leaves you hoping for development or something new after each episode but it just never comes. The GL tag is somewhat misleading since it doesn't really have any romance. I could go on to write an essay about idol industry, showbiz, creepy fans and such, but that's a rant for another day. In a sense it makes you happy there wasn't any relationships or romance between idols and fans, but at the same time it's really frustrating.

So. It's a good anime to watch if you have nothing better to do, but otherwise it might just feel like a waste of time. If you enjoy incredibly cute girls, it might still be worth it.

I really like all the characters, their personalities and their relationships to eachother. What is especially great I think, are the many subplots and multiple stories told with this great variety of characters. It's really refreshing to see such a light-hearted, funny anime, but with actual character development at least in the majority. Especially in Maina, because it's rare to see an idol struggling with these types of issues and slowly opeing up and overcoming them in small steps.

Also, the way this anime plays with the differences between love and fan obsession is hilarious and makes it unique. So, there is definitely a little love story between two women hidden in this, but in a very genuine way. That's also a very positive aspect, because it seemed so sweet and natural, not like many other yuri stories, which were clearly forced by men.

Although it might've been a little bit repetitive, one has to consider that this type of anime is meant to be like that. One of the nicest, cute anime I've seen lately, I wish it was more popular, it needs more attention!

I agree with someone who said that Eripyo was screaming too much, it was funny, but sometimes it was just a little over the top. That's pretty much the only thing I can criticise next to the story development, because I kinda expected more in the end to be honest.

But the amazing characters and their relationships to eachother, (and the very nice animation of course!) definitely make this worth a watch. So if you need something lighthearted and funny to watch, this is a very good choice. :)

The anime very funny and interesting. I Personally really enjoyed it.

“Perseverance is a virtue that cannot be understated.”

This show isn't as much as a music show like Idolish7 as it mainly focuses on the devotion of Cham Jam's fanbase or should I say fan toward one girl: Maina.

Eripiyo works several part time jobs to pay for her obsession to her the least popular member of the girl group Cam Jam. Although Eripyo wants Maina to succeed over time Maina soon grows concerned over her lone fan's devotion which is a nice change to these shows which are mainly focused on the music or behind the scenes aspects and NOT the fans who popularize the group.

This show is a nice change of pace and the music isn't a focal point as it is mainly a plot driven device used to promote new singles made by the group's Also when I first heard this show I thought it was another perverted comedy male driven anime however I was wrong Eripyo's female which is a change of pace however, she has almost all of the characteristics of a male weirdo ex: friends with two male weirdos. However, one moment she accidentally runs into her in a train car and she controls her emotions to be civilized and not obsessive.