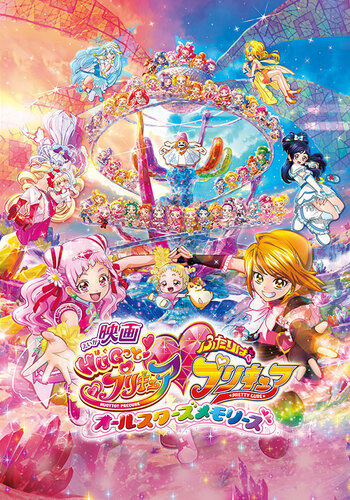 Toei Animation went all out for the 15th anniversary of the Pretty Cure franchise.  More so than the tenth annivrsary when Happiness Charge Pretty Cure began with modest greetings from select precures who thanked us for the support and wished for further cheers for years to come.  There was more in the fifth year out, when the film short Pretty Cure All Star Dream GoGo! introduced the idea of teams of Pretty Cure uniting to fight a common foe.  This surged the mega-series forward.

But year fifteen produced two products which featured the fifty-some girls who became legendary warriors through the seasons.  The 37th episode of Hugtto! Precure (one should do a study of the combat scenes in this one 25-minute episode with the battle segments of New Stage 3, [you know, the one with the Teddy Nightmare Bears] which did come out shortly after the tenth year) and this Precure All Star Movie, All Star Memories.

Memories is a blend of the new Pretty Cure All Star mode of focusing on not more than three Precure teams, in this case two, the Futari Wa Pretty Cure Max Heart of the first two years and the then most recent team of Hugtto! Precure.  But in this case not dealing out the other Precure teams.  They actually do get a fair amount of screen time ... in a sense.  Eventually, the action focuses on the team leaders Cure Black and Cure Yell.  Then, for a short period of time on Cure Yell as the crucial Pretty Cure who must buck up to save the day.

The nemesis is Miden, a spirit of an unused, deteriorating camera.  He demands memories, and decides to gain them by stealing them from others, particularly those of the Pretty Cure.  He first attacks the Max Heart team, and the outcome is uncertain, only that Shiny Luminous intervenes to blunt the attack.  Flash forward to the Hugtto team who is enjoying a picnic where Cure Yell and Cure MaCherie are engaged in snap-shooting Hugtan and the girls with their cell phones.  Miden appears and attacks the team and is driven off when the Max Heart team of Cures Black and White appear.  Explanations are brief and confused when Miden strikes once more and succeeds in stealing the memories of all the cures except Black and Yell.  The loss of memories convert the girls to toddlers.  Yell becomes frantic over baby-sitting her brood of friends now become bratty waifs.  But Yell, always the most sympatheic of the Pretty CUre, commiserates with their sad plight and forgets the misery tending to four helpless babes (and Hugtan makes five!).  This compassion (and a healthy supply of Miracle Lights) restores Cure White and team Hugtto!

All the Pretty Cure of all the seasons appear, and the best part comes in the early scene where the just short of fifty precures are first seen as infants.  Hair styles and uniform accessories help, but one would have to pause the film to check off each and every cure.  They are clustered together as teams in this segment, which helps, but it does take a good minute or two to identify everyone.  At first, the plan to save these girls is to find and defeat Miden, but this approach only serves to enrage Miden to steal the memories of the whole city, creating a sparkling, wondous crystaline realm of calcified memories, at first a jolt of happiness for Miden, but the sensation wanes and he is once more morose.

The secret to the restoration of the baby precures is understanding Miden, which Yell attempts, even though it means the defeat of all the Pretty Cures who are now all babies save for Cure Yell who is plummeting through the empty vastness within Miden.  Once Yell realizes that Miden is the spirit of a discarded, unused camera, she knows the emptiness of Miden's exisence, which no amount of stolen memories could satisfy.  Again, the audience goes nuts wih the Miracle Lights and all the Precures return to normal, reducing Miden to a pathetic entity with no essence of reality other than the hatred which had driven him to gain his personablity with the experiences of the Pretty Cures. Yell convinces Miden that it is still possible for him to gather his own collection of experiences and pledges to help him do this.  Happy that such a future for him is possible, the spirit Miden evaporates, leaving only the camera.

Yell is good to her word.  She organiizes a picnic for the Precure where she uses Miden to photogaph the Pretty Cure as their normal alter egos.  But not as groups of teams.  Pictures of the athletes together.  The models and actresses together.  The smart girls together.  The youngest Pretty Cure, Cures Muse and Ace together.  And then, finally, the masterpiece.  All the girls who make up the Pretty Cure teams together, but not grouped as team members.  Just using the basic photographer's rule.  Short people up front.  Tall people in back.  Again, pause and see how many of the girls you can identify.  Purest fun and enjoyment, if you have a good memory (hey! pun intended).

I would call this the best of the All Star movies for two reasons.  Though it focuses on two Precure teams, all the cures are viewed and given time for a battle sequence with a horde of tiny Miden clones.  All teams are reviewed from Kirakira ala Mode back to Max Heart. Second, it comes from a line from Harry, the Hugtto! hamster-fairy.  WHO'S YOUR FAVORITE PRECURE(S)?  The translator left a note that he was taken with Suite and Smile.  I tend toward Reika Aoki (Cure Beauty) and Kise Yayoi (Cure Peace).  But the movie sends a message that though all these years, an ever expanding army of wonder-girls have been gaining fans and admirers.

As I write these words, Star Twinkle Pretty Cure will end its run and a new season will be in the offing.  More memories on the way!