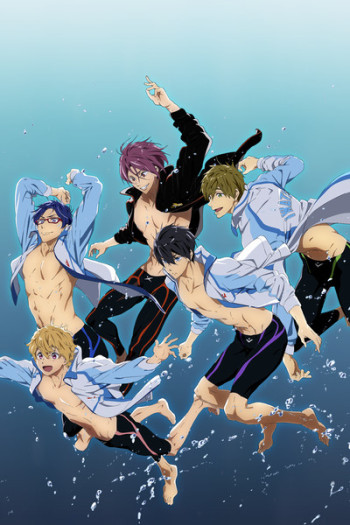 I sat in the back of art history to watch this the moment it came out. It was worth it. It was ridiculous. It was silly. Almost the entire episode was a meme. I am a bit ashamed that I ignored class, but I don't regret not waiting. 10/10 would spend months trading memes about this with friends again.

The boys from Iwatobi’s swim club head off to the Samezuka Academy to support their friends booth during the school’s annual festival. What starts out as a fun day eating food and playing games turns into an all out Water Gun War, as two teams, both made up for students from both schools, try to be the ones who actually want to end up dry.

What I loved about this episode was how they decided to take on other styles on Anime for the twenty minutes. Just like the original series that turned the ecchi genre on it’s head, this time they did the same with Maid Cafes and the ever prevalent “Girls with Guns” style. Even in their new styles they found a way to make the show so enjoyable and actually funnier than the series itself.

While there wasn’t any character building in the episode, it was nice to see everyone acting in a lighter tone, where even when they turned things into a competition, it was still playful instead of the pointless drama from the series.

It’s a single episode, so I can’t rate it as good as the series, but it was a very entertaining little bonus.

This was so much fun to watch! With all the rivalry going on in this show, albeit just a competitive one, it's refreshing to see everyone getting along and having fun. Very funny to see how everyone took it so seriously and the ending of the fight was oh so very Haru.