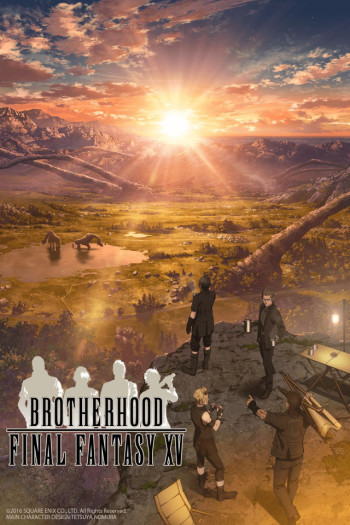 Hey! So, this isn’t much of a review but more like a summary/here’s what to expect kind of thing. First of all, my hype for Final Fantasy XV is suuuuuper high…as it should be. Second, I’m not claiming to be an expert or anything but it looks like there is some confusion around this anime so I thought I’d lend a hand in trying to clear things up.

Okay so here we go, as many of you know there is a new Final Fantasy video game coming out in November. If you didn’t know that, get on it yo! This anime is kind of like a fun backstory promo for the game and there is a movie (Kingsglaive: Final Fantasy XV) that is an even bigger backstory promo. The anime focuses on a few of the main characters and sort of their place in the story while the movie does an overall realm backstory.

Here’s what to expect from this anime:

That’s about it. If you want a full on anime series this isn’t it. It’s short and simple and seems to be made for the fans waiting for the new game. Just wanted to throw this out there in the hopes that someone might find it to be helpful. Get hype!

Notice: this review will evolve as the rest of the episodes get released.

Episode 1: Before the Storm

Too short a first episode (11 minutes!). Although I wish the rest be longer, I honestly doubt it.

Colors and animation are beautiful, but the characters themselves look too stiff. Through quick conversation bits there's a brief establishment of who's who (within the main 4 characters only); the situation of the Kingdom of Lucis and a little bit of backstory, all while displaying different views of the Duscaean region.

For fans who played FFXV Episode Duscae demo, there is nothing new here (yet). Unfortunately, if this anime is only 5 episodes of 11 minutes each, I can't foresee much else happening.