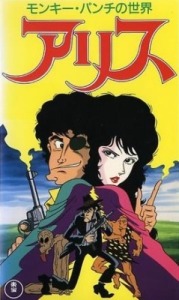 Alice was a beautiful woman who betrayed the wrong man and died, and as a result of her actions, the man (a mad scientist) decided to resurrect her. Using the skin from his brain, heart, and "love organ", he spent sixty years designing his beloved's new image and purpose: to be men's eternal sex slave. Fast forward to the present, and the man is on his death bed. He charges Don Jirochou, his adopted son, to hunt down Alice and kill her for her betrayal. And so, Don sets forth to find Alice and put an end to her - but not before he puts it IN her as well, multiple times!

StorySome people envision Hell as a torturous place full of fire and brimstone; others envision it as a room filled with nothing but mother-in-laws. Others, like me, think of Hell as an endless span of time when the only activity available is to either stab yourself in the eyes repeatedly, or watch Go Nagai brainstorm "awesome" ideas for new excessively ugly and ecchi anime. After watching Alice I can successfully say "welcome to Hell."Now don't get excited - Alice is not a Go Nagai title; even Go Nagai's artwork is more attractive than this... BARELY. Alice is a work by Monkey Punch, the minds behind Lupin. However, the suave and endearing Lupin has been replaced by freakish and hairy protagonists who like to screw anything with a crotch (except transvestites - they do have taste, you know!) The "plot" is definitely Go Nagai-worthy - I half expected to see his name in the credits. Logic wins again in this epic tale of a woman who is resurrected as a sex cyborg, is "doomed" to be horny forever, and will "never again laugh at a small dick" (there's no way I could make up gold like this, folks!). After the brief intro, the story begins with Don Jirochou running across his naked and decrepit father in the sand (just keep repeating the mantra "logic wins again" and it will help with the headache); his father tells him to kill Alice, the cyborg he created. Why? Who knows. The rest of the anime is a delightful and circular repeat of the following lines and actions:"I will find and kill Alice to avenge my father!""I've found Alice!"[sex sex sex sex sex sex sex]"Alice has escaped!""I will find and kill Alice to avenge my father!"Repeat. Repeat. Repeat. Literally nothing else happens. The content itself is very borderline hentai, with plenty of sex shots, both real and "suggestive" (the most frequently-used imagery is of a male gender symbol shoving itself through the hole of the top of a female gender symbol... sexy! -_-). There are also many choice lines such as "since you were born as a slave of love, your weakest point is your love for people" (what?!),  and also a small "sub-plot" (if you can call it that) about Alice and Don falling in love - and by "falling in love" they really mean "have sex over and over until our mutual herpes forces us to stay together out of desperation." I can't think of one positive thing to say about the story. I'll give it 0.5 points for being potentially interesting to men. AnimationA combination of the hunchback of Notre Dame and a melting wax candle looks like a model compared to the men in Alice. It's ironic that all of the women (well, robots) eagerly jump on the men's junk, considering any self respecting vagina would have seen them and immediately dived into the comfort of the nearest chastity belt. Yes, Alice cheated on the mad scientist who, I might add, not only looks like Gollum but also has a cone head, boils all over his face and his skin appears to be melting off. ARE WE REALLY SURPRISED?! The female character designs are better, though generic. It's extremely rare that we see one of them with clothes on as well. The rest of the animation is just as crude and godawful. If Miyazaki films were the Mona Lisa of art, Alice would be the stray piece of soiled toilet paper at the bottom of the bathroom stall. SoundTotally unmemorable audio on all fronts. I have nothing else to say for this section.CharactersAs with the music section, I don't care nearly enough about Alice to provide an in-depth analysis of the characters. If you like misogynistic, troll-like characters, you'll fit right in with Alice. OverallAlice is hands down one of the worst anime I've seen; it has literally no redeeming value whatsoever. The only people who might enjoy this are men who have a fetish for watching male and female gender symbols going in and out of each other in an act of faux sex, or women who like looking at wrinkly and grotesque men. For the rest of the sane people in the world, do not pass go, and collect $200.