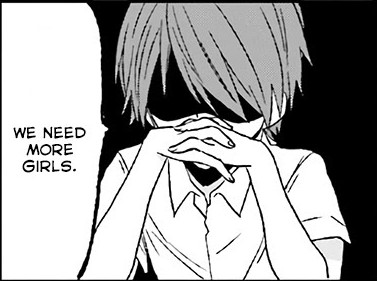 I'm a straight guy who loves fluffy cutesy shoujo-ai / yuri manga. I don't really know why, but I find romance so much cuter and purer between two women, rather than between a straight couple. If you wanna know my favorites so far, check out this list.

Though yuri's my favorite genre, I can enjoy pretty much any manga given that is somewhat realistic. Maybe it's because I'm getting old but I get bored with stuff like Dragon Ball, Solo Leveling, One Piece, shounen in general. That's why probably my second favorite genres are slice of life and autobiography. Stuff like "Nana", "Blank Canvas" or "My Lesbian Experience with Loneliness" to name a few, really get me engaged. That's not to say I don't enjoy fantacy, I do as long as it's done with some taste and the focus of the story is not fights or spectacle (eg: Berserk). I'm looking for the deeper themes. I'm also kind of a shameless perv, I like stuff like incest and bdsm.

Since I've recently got back into manga, I'm looking to meet some people with similar tastes :)

Thanks for reading, may you have a great day!