So, I'm from the U.K and have been watching anime for about 3 years. My first was Full Metal Alchemist in english dub, I was amazed that animation didn't need to be for just children, though I am a huge fan of Hayao Miyazaki ( Spirited Away, Howl's Moving Castle etc). Since then I have probably watched over a 1000 hours of anime and have basically given up on most TV. I think this is because I love fantasy, magic, beauty and anything that captures my imagination. I feel that I have progressed over time watching things that I wouldn't have originally thought of watching like Monster and Death Note. My most recent watches have been Mushishi which almost nearly always hurts (in a good way) because it doesn't always have a good ending and Kekkiashi which I find very classical in it's concept, characters and animation, but very much enjoyed. I now have a fasination with all things Japanese, I love the language, the food, history and culture and gave up smoking so I can save up to go there with my family. I really hope I make it!!!!

Well 6 weeks on I didn't manage to keep quit, but hey I will do it and I will get to Japan. Anyways I thought I would say a little more about myself. I live in a very rural county called Wiltshire, and well, it's home and it treats me well. My occupation is a counsellor. It can scare people off, but it really was the only job for me.I really enjoy understanding people and relationships and just how we tick. I'm not critical and pretenious of others, I'm not a ideal human myself, it's more that I enjoy being one on one with people, having honest relationships. It can be very humbling sitting with someone at their lowest ebb. And in some strange, twisted, warped way this is what I get from Anime. Whether it's watching the snot and tears of some character, or slip ups in an adventure or relationship, or just how hard life is sometimes, the battles that we all face, Anime shows it alll. But also it fulfills a fantasy, the thought that one person (egotistical & narcassitic or what!!!) can change the world. I often feel that I can't make a difference, in what's happening around me.That I can't solve the oil crisis, famine, global warming, nothing. But then I watch something that portrays some school aged kid, an outcast or freak that makes a difference, saves the world. And I realize that the people that make this stuff feel the same. And I guess many of you are too. So we come together here and not talk about the world, but talk about adventures and fantasies, but inside we are saving the world too. It just needs to be one person at a time, not with super powers, but with our gestures, our patience and understanding.

(P.S. THe wine was flowing)

It's been a while, a lot more anime under the bridge. My interest hasn't dulled though it seems harder to find new stuff sometimes. I recently watched XXHolic & Kei and really enjoyed it. I am also very happy when something passes my expectations. If anyone fancies looking through my list (When V3 is up and running that is) I would really appreciate some recommendations, it always really helps. There has been many, many times when I have read a synopsis and thought that's not for me and then a friend will say that they really enjoyed it. Wolfs Rain was like that, I couldn't get past the first episode but 'Mig' pestered me into it and I loved it, in my top ten infact.

I can't wait until V3 is up, I miss some of the features, ridiculously so! Like looking up other folks anime, it's a follow up from my last blog, but I like to find others like me. Also though, I wonder about the folks who watch anime I wouldn't even contemplate. Sothis is a good example, she watches really different stuff to me and reading her bio I can tell she is different too. This is not a bad thing, it helps to look into others lives and see qualities I would like and how to achieve them.

Remember any recs are welcome as are any new friends.

Just a short update, as I haven't in quite a while. I am now pregnant with my second child, and I do hope this one will like anime as much as my first, I will try and infect another young mind. All in all I am very excited if not very worn out, but the anime keeps me going, hehe.

I am watching anime like crazy, trying to get to the two month marker, which is unbelievable difficult, there just isn't enough hours in the day. Only one week, 2 days and 10 hours to go.

In terms of what I have been watching, well in truth there hasn't been hardly anything that I've wanted to mark 4 stars and above, but Shounen Omnyouji was pretty good. It seems to me that unless it is able to bring a strong emotion out, I don't mark it 4 or above and as I've said in previous entries, those are starting to get far and between.

So as always, thank you to the guys who run this joint and anyone who writes reviews, I really appreciate this place, it's my anime home. Thank you..xx

Wow it's been a whole year, my baby girl came and is now five months old and as you may imagine finding time to watch anime has been rare. However these past couple of weeks I have had a blitz. Found time to watch the entire Tsubabsa Chronicles, which if someone reads this, I really could do with explaining why there are huge gaps between the first two seasons and the subsequent oavs. Is it an anime that needs to have been read first? I understand the cross overs with XXXholic which, is one of my favorite animes, but does this mean there is no more from either of them or is it ongoing? Very confused!

For my birthday I received The Ghibli Collection, which I have really enjoyed, especially My Neighbour Totoro and Kiki's. Ponyo is definitely a enjoyable movie and has become my favorite movie to nap too.

The final series of Inuyasha, Oh My God!!! I am so happy, my all time favorite, and my daughter is overjoyed too, so much so that she cant wait for the dub and is watching with just subs, maybe this is the start of her being able to expand her selection, that would be great.

On an other note, although not anime, but I am still really looking forward to see is Toy Story(iii), perhaps that statement won't echo through the halls...lol

So from now it's only eleven hours until I get to the two months marker and by my reckoning I think its around twenty six episodes, I'm hoping for fireworks, fanfair, perhaps a special mention in the Times or the 10 o'clock news...lol

from what anime is your profile picture, it is really cool 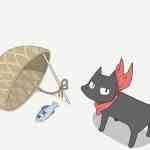 Do not forget that Higschool of the dead is ecchi.