I love anime. I have watched a lot of animes so far. My goal is to watch as many animes as I can. I love romance animes specifically because I have no love life to speak of. and even if there was one, my boyfriend would leave me when he saw me fangirling over a hot anime guy lol ^3^ if anyone really likes a certain romance anime then just tell me. I love to hear other peoples reviews on animes because sometimes theres romance in shows I would have never guessed and they turn out to be my favorite anime. So please, recommend any anime you want.

Fairy Tail- (175 episodes) Set in an imaginary world, the Earth Land, there exists a Mage Guild called "Fairy Tail". Fairy Tail is stationed in the town Magnolia, residing in the Kingdom of Fiore, and is currently governed by Makarov, Guild's master. Lucy Heartfilia, a 17-year old girl, wishes to become a full-fledged mage and join one of the most prestigious Mage Guilds in the world, Fairy Tail. One day, out of pure coincidence, she meets Dragneel Natsu, a boy who gets travel sick, but has a very cheerful nature. However, she does not know that Natsu is the closest connection to Fairy Tail, as he is a Mage in the Fairy Tail guild. The story goes on to explain her life in the guild and is centred around Natsu, herself and their friends as they strive to become better wizards and defeat all evil.

Karin- (24 episodes) In the 21st century, a family of vampires settled down on the grounds of Japan and lived a modest life whilst sucking on the blood of humans discreetly. However, the eldest daughter of the family, Karin Maaka, has an embarassing secret which cannot be revealed to anyone. Even though she is a vampire, she does not lack blood like her family members. Instead, she overproduces blood to the extent that she transfuses the excess into her victims, hence increasing their blood levels. Despite her troubling body characteristic, she attends school like any other high school student, that is until a new transfer student, Kenta Usui, enters her life.

Baka and Test- (13 episodes) Advanced placement into a school of higher grade proof-reading is determined by the results of the Promotion Test strictly for class type. Ranging from A class with the best facilities anyone can offer all the way down to F Class which is composed of low dining tables, rotten tatami mats and other worn out facilities. Students can change classes by competing using the Examination Summons Battle system or ESB. Students summon characters with their equivalent test mark scores and use them to compete with other classes.

The Wallflower- (25 episodes) Kyouhei, Ranmaru, Takenaga, and Yukinojou are beautiful, handsome, young men living in a huge mansion. One day, their landlord, whom they call "Auntie", asks them a favor: to make her niece, Sunako, who's going to be living with them, into a respectable young lady. She agrees to make their living expenses free of charge if they succeed, but if they fail, she'll triple their rent. Due to their confidence in knowing how to deal with women, they agree, but once they meet Sunako, they begin to realize that their lovely living arrangements may soon be in jeopardy. 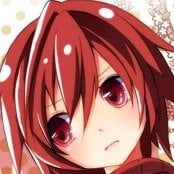 well may i ask what your fav genre?

well i spent most off my free time watching anime

Welcome to A-P...hope you enjoy staying here...you can ask me anything(anime especially)...your "about me" is really similar to me but i don't put it on my "about me"...anyway nice to meet you ^_^ 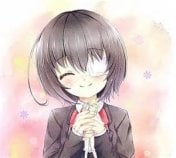 Oh I spelled it wrong it's kazo no stigma