I'm a physics teacher.  I like watching Youtube videos and playing video games.  I know Russian, Japanese, and bits and pieces of various other languages.

I have two crazy parrots (Iliya and Zoe), a fish tank, and a parakeet (Blue) to keep me busy at home (plus my boyfriend, I suppose). :-D  I am a translator for Outerworld Scans under the name of ju-shi.

My favorite kinds of anime/manga are horror, supernatural, artsy and just plain silly. If anyone needs a recommendation of a good horror/supernatural series, just ask me, because I've probably seen most of them.

Yeah, they were 11 and Roots and lily C.A.t. definately should be in the same list. Nice choices.

Hey there! I noticed that you dropped Kemonozume after the first episode. I would recommend watching at least the second episode, because it looks like we have pretty similar tastes in anime. I think the first episode was absolutely terrible, but ended up loving the series despite it. 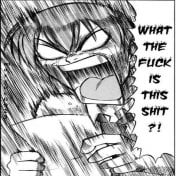 You're in luck! Both Psychic Wars and Baoh (two of the funniest not-meant-to-be-funny anime I've seen) are available on DVD... so if you have netflix or blockbuster that would work well for those. Black Lion is also hilarious and I think also available on DVD.