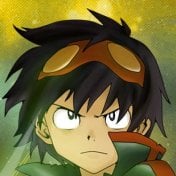 5 Stars: Anime Masterpiece.  Excellent character development, engaging storyline, well paced, and most importantly a complete ending.  Nothing worse than an anime that leaves it open ended.  Would recommend to any anime fan.

4.5 Stars: Superb anime.  Only one or two minor flaws kept this from being a 5.  But overall a very high quality show that most likely anyone would enjoy.

4 Stars: Great anime.  A highly enjoyable watch that employs multiple traits from the 5 star rating, but doesn't quite have them all.  Most people would probably still find it entertaining, but a person who isn't a fan of the genre in general might want to avoid.

3.5 Stars: Very good anime.  Multiple enoyable elements, but perhaps one or two problems that kept it from a higher rank.  Would recommend to any serious anime fan, or someone who's interested in the genre.

3 Stars: Good show.  Above average in a couple of facets.  Enjoyed an anime here, but wasn't completely taken in by it.  Though an anime ranked here had its problems, didn't regret watching it at all.

2.5 Stars: Average show.  Cliche characters and/or storyline, but the show still still contains some entertainment value.  Would only recommend to a big fan of the genre.

2 Stars: Below average.  Struggled through at certain points.  Not much originality and/or there was poor pacing.  Might have had one or two redeemable components, such as a likeable character, or some decent animation.  Would struggle to recommend to anyone but the biggest fans of the genre, or other shows that might be in the same franchise.

1.5 Stars: Starting to get into the bad anime here.  Very little positive about a title here.  Over cliched components could make for a troublesome watch.  Rarely look forward to the next episode, unless its the final one.

1 Star: Nothing redeemable here.  Nothing stands out positively at all. Dreaded watching every episode, and did so only to finish it.

0.5 Stars: A truly bad anime.  Plot holes abound, with rushed/dragged out pacing, and no satisfactory finish to speak of.  Regretted ever starting an anime ranked here, and will vehemently try to stop others from suffering the same fate. If I didn't have a no drop policy, these shows would've been kicked to the curb.

Encourage mmag13 to add some by leaving a comment below!

hey mmag13 how have you been these past couple months? i see you've finished tokyo revengers. did you enjoy it? i've been thinking about watching it myself.

Hey, just stopped by to say you have a really great Top Anime list. ^^ It's not too often that I see someone with such great taste.