If you take a story that includes everything from a love triangle, to sexual promiscuity, to rape, to characters you'd expect to have continous flowing flaws and come on the edge of breaking down, you'd expect it to be great, right?

Honestly, I'll probably never watch the series again. It might sound harsh, but read further. School Days is a series that depends on how you want to approach it-for those who want a shocker series, it'd probably be more of a pleasant watch than those who look for solidly constructed characters and something different than the norm, and despite what some may say about SD being unique, it's not.  There have been some series that have used the same formula of shock factors (i.e. Shuffle!).  The problem isn't so much building up the conflict, it's the hollowness of it.  There are some themes here that are built, but lack proper development. I know the predominant argument for SD is that it's not meant to be realistic but entertaining...but where does the line for entertaining merge? Simply by graphic drama. I could understand some rollercoaster rides  - for example a series that deals with multiple relationships and pregnancy is the josei series NANA, an anime adaptation done well, though with some slight saturation in it's dramatic themes.  However, despite SD introducing some potent themes, I couldn't wrap my head around or even feel more than some bland sense of pity for the characters, and by the end, it left me feeling disgusted because it threw any sort of tangible tension out of the window.

Somehow, I just couldn't totally say this series was bad despite the bitter taste it left in my mouth, because it really wasn't considering what the story was trying to convey overall. It wants you really to hate some of what the characters do and present it in a way that's controversial. I have the feeling if you're looking for a story with a lot of shock factor and less traditional romance and realism, School Days would be more in your venue.  Yet, for someone who looks for relatable emotions and good, developed characters, it truly isn't here.

School Days focuses on three main characters: Makoto, Kotonoha, and Sekai.  Makoto develops a slight crush on Kotonoha while riding the subway one day, and when Sekai notes Makoto's crush, she throws her support in hooking the two together with full support. Yet, she harbors a secret fondness for Makoto in her heart-a factor that becomes the worm that eats its way through the hearts and progression of the series to come.

From that point on it becomes a web of betrayal and sexual deviancy, and while that factor sounds intriguing, the presentation of School Days really doesn't back that factor up because it doesn't give the characters as much weight on that factor. Makoto himself is a lackluster male lead with an insatiable desire for lust and sexual promiscuity-and while in his construction it does make you hate his actions, he's not more than 1 dimensional with tunnel vision-no reasoning (and I have to clarify-it's not so much what he does that's the problem, but more or less how it's developed), and very little shown to show the backbone of his addiction. Only in the final few episodes you actually see some hint as to where he laments and realizes he has a problem-a stronger irony it would have been if not presented so late or so lackluster.  Sekai and Kotonoha, along with the harem cast of girls in the series, are unfortunately the victims of this deviancy, yet none of the girls, save for Kotonoha and Sekai, are given adequate development to really give Makoto's affections weight-then again, perhaps it ties in with their roles overall, not really given much heart, but as pawns in a game where their hearts are given less weight than their bodies. This could have had so much more potential if the time were taken to really give the side characters as much focus as Sekai and Kotonoha, but unfortunately, it was impossible to do.

I'll give it to the series for developing Sekai and Kotonoha, probably the better developed characters in terms of stark impact of all the events, but by the series end, it was clear that things were turning toward the extreme route for both girls.

The series does have nudity, but not as prominent in the TV version compared to if you saw the DVD, much more overt in places, and heavier than that are the series thematics, hence I'd give this series a rank for a more mature audience.

Then there's the ending, and I think it could strike the viewer in a number of ways.  For me, the ending was only partially expected, but it would have had more impact (i.e. given a greater shock) to me if it didn't feel tacked on and rushed beyond oblivion. The reason I say it's rushed is because there's a lot that happens and it really could have just as well had another ending, but it went the route that most people thought and came off as a display moreso than something you could really feel sentiment toward. My approach with this series might be different than what most may view it, because in entertainment, people may not give this as much weight because it puts on a good show subjectively, but for me who looks for heart, good characterization, and lasting value in a story, this series doesn't excel.

School Days actually could have been much more of a beautifully told tragedy, but ended up as nothing more than a shallow watch. I'd only recommend this to those who aren't looking for a traditional romance or those who don't mind series with conflictive confrontations and themes without much expansion or development.

I didn't always like the character designs for School Days, but it gradually warmed up to me as the series went on.  Backdrops, Cel production values for School Days are very well done and noted for a 2007 title.  I can't take away much from School Days on this aspect and I think people will enjoy it, save for some points where it seems a little choppy on the design.

The soundtrack to School Days was among the more noteworthy ones  I've heard in quite some time.  The opening theme didn't really catch me at first because it does feel like the opening to an ero game, but it grew on me as I watched the series.  The insert and ED themes, particularly "Waltz" by Kanako Itou, were beautiful and definitely among my favorites overall.

Voice acting actually made School Days better among the characters, the VAs were well chosen for the personalities, but the overall story was what took away from the characters more than the quality of the acting.

Not much to note on the characterization-the characters aren't handled as well as they could have been.  The primary three are perhaps the characters you follow most throughout the overall series, and honestly, are the only ones that are well developed, even Makoto I'll admit.

Sekai was easily the most likable in the start of the series with her upbeat and overall sweet personality, and you really feel for her in some scenes when she comes into conflict with Makoto for not being decisive about his affections, and she ends up being just as flawed with her own insecurities.

Kotonoha may strike some as being the typical shy girl stereotype...and indeed she is.  There were some scenes I even tried myself to really feel for her character, but the way the series didn't expand on the things that happened to her, or just left situations without really taking her character further that disappointed me.

The secondary cast aren't developed all that well, and easily fade into the background save for points where they cause or perpetuate conflict among the main three.  Somehow, if the secondary cast were given more collective weight and development, this could have been a better series.

Overall, a hesitant recommendation.  I personally did not really like it as I found it shallow and underdeveloped but there were moments I admit did strike me, and thus I wouldn't completely write it off, but it's certainly a type of series that could have been so much more.

Even if I was a crazy fan of the anime I wouldn't argue with your review from School Days. You did a great job there, just wanted to comment on that.

I hate it when I remembered it I feel vomiting

one of the worst animes ever... 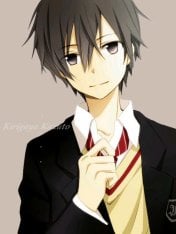 School Days is just... horrible! i liked the beggining of the series untill i got into it more.... it has a very bad twist at the end and i thought the main character makoto was an ass and u will understand if u watch it but i suggest not to.... i give it a 0/10 rating... im thinking u will understand why i rated it as that if u watch it... but dont.... well bye!

Personally i loved this Anime up until Episode 5 at the Ending,i knew something bad was about to Happen.it was just that predictable.

But Overall they shouldnt have killed Makoto,sure he was an Asshole but if it was anyones Fault it was Sekai Saionji,for Hookin them up in the first place he was the first 1 he slept with while Dating katsura.she Started it all so why did it end with such a horrific Ending of him being killed.

Should of just been Sekai Saionji who Died and let Makoto an katsura live there lives together.Since they were obviously the better Pair!

I cant say i Hate this Anime i just hate 50% of this Anime il watch the first half but then i just think fuck it,it just goes downhill from there an becomes unwatchable.

if i Wanted that kind of a Ending to a Anime or anything Dam id go watch a horror Movie not this shit ending.