Lend your ears to the first fully musical installation of the Macross franchise. Now granted, this isn't so much a criticism of the series on the surface because if you're a veteran Macross viewer, the Macross installments have excellent J-pop songs to sing along to. Even I find myself humming along to some of the tunes from this collective series (most notably "Voices" by Akino Arai from Macross Plus).

Nor is the idea of using music as a weapon if you know some of the backstory of the Macross franchise and why it was such a potent part in collective schematics. Even Gundam Seed/Gundam Seed Destiny had music as an element of illustrating the conflictions and turbulence caused by the conflictive sides within the war. However, Macross 7 takes this to another level quite literally.

If you looked "campy" in the dictionary, this would aptly describe the format of a series about a youth (the rather impulsive Basara) who heads a resident rock band and seeks to use his music as a weapon to cease the fighting among the isolated colony. I believe Macross 7 takes place quite a bit after the original series, so there are some familiar faces that will show up in kind back and forth, but otherwise, unless you love hearing the same songs played brashly in each episode and repetitive battle sequences...it really doesn't have all that much to offer to the table.

It's not so much the songs themselves aren't enjoyable in their own right, it's just there are only so many times you can actually listen to "Planet Dance" and watch where it has no effect on the enemy enough to make you wonder when something will actually happen. In truth, the series actually does get better as it continues forward, and the music is memorable in its sole consideration (provided you like Fire Bomber's style of music), but it's never enough to completely pull the story right out of the mud. By the ending, I felt satiated enough to find closure at the end of the story, but I felt I didn't pull enough from it to really resonate with either the events or the characters themselves.

The animation does show itself as being quite antiquated when juxtaposed to peer sci-fi anime series of current standard. If you're used to the animation style of the classic Macross, then you wouldn't be terribly opposed to this, and for a series created in 1994, you could say it went well with series of its time. Cel production and backdrops also show their age,as the space scenes don't really resonate any sense of realism, and the mecha designs are quite average. Yet, considered this isn't a series meant to take itself too seriously, it's hard to grade down. It almost reminds me of my first impression of G Gundam: an intentional parody in the design of mechas and the mechanics showcased in the series.

There are people who are going to really wonder why I give Macross 7's soundtrack so high (for me 7.5 means pretty solid), but you honestly can't pull yourself away from the music in this series once you get it stuck in your head. I'm not kidding. If "Seventh Moon" is any indication, it's one of the best songs to come out of the soundtrack collection from this series. Catchy, romping guitars and lyrics that you could find yourself easily singing along to even if it doesn't match your tastes. It would be one that'd easily make my favorite anime themes list if offering one for consideration. The only drawback might be that the singer's tonality might not appeal to you and throw this notation completely out of the window, it's quite depending on your own preferences in music. Honestly though, if talking about favorite themes, I couldn't forget the first ending theme "My Friends". I think the female singer's tonality is a lot more enjoyable and quite cute to listen to overall.

"Planet Dance" at first grated on my nerves so much I actually muted the scenes when it played...in every single episode at least once leading up to about episodes 17 or 18, if I recall, and if you're watching in a stretch...it's not all that flattering. However, if you isolate it from the series, it's actually a song that's a lot of fun, in a cheesy 80s rock vibe.

BGM actually isn't bad either in overall collective contexts, some of the vocal performances are songs that have been featured in previous Macross series and are nice tunes on the ears, others are dynamic instrumentals that keep your feet tapping. Then you have power ballads like "16" that, again, if you like Fire Bomber, you'll come out of the series liking it if you haven't been deterred by its repetitiveness during the series.

I'm lukewarm about the characters in Macross 7. Some of them are certainly full of personality, but I don't think there was just one character that connected with me throughout the entire series. Granted, Macross 7 is very much a mecha comedy with some dramatic elements thrown in and a strong soundtrack to boot for its time. In consideration, however, Basara and Mylene might wear on your nerves after a time in the initial part of the series, particularly when the story follows a more episodic format. When you start coming into the core of the conflict in Area 7, then you see their characters mature a little more, and even the hot headed Basara's not that bad compared to other mecha characters, he's just run of the mill when it comes to his "type" of character. I understood the mentality taken with the characters (much like I did in mecha series like G Gundam and perhaps even Gundam X) but they still don't have quite enough to fully bring me into their lives and demeanors as I watch, and I often predict how they react to certain events rather than just allowing the series to open me up to who they are.

Nice music, nice settings, but overall disconnectivity to the plot and repetitive elements make me grade this to an average rating. 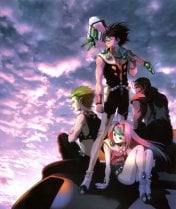 Yeah, most people give it an average rating. I myself give it a 9.5/10. It's kiddish and repetetive, but I think that just adds to it's charm.