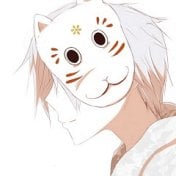 Supersherlockwhovian, I occasionally indulge myself the pleasantries of the animation world. Took one year off everything anime-related; now I'm trying to catch up, or at least finish some series. Tolkien-head, but not that judgemental when it comes to Jackson; I like to consider myself somewhat of an "open-mind". Potterhead to the grave and beyond.

Greatest fear? Keanu Reeves as Spike in a Hollywood-remake of the greatest series ever made.

My ship? Bad boy always gets the girl. High wind under under thy sail, oh ship o'mine!

I will always watch anything that Shinichiro Watanabe lays his hands on - his sole name is enough a trademark to make me give the title at least a chance. Same goes for Yoko Kanno.

My time is my own, but my patience is very limited - I don't have it for new "trendy" series, and if I give it a chance, well, that's the best I can do.

Anime ratings here are based solely on how much I've enjoyed one show or another, but sometimes nice visuals can add half of star or even a whole star even if the plot or characters lacked a bit in savour.

My favourite character is by far, Kamina from TTGL, and Heiwajima Shizuo follows him closely, as well as Holland Novak.  My favourite seiyuu is Shinichiro Miki. Other seiyuu's I worshiplike are Romi Park, Mamoru Miyano, Koichi Yamadera, Keiji Fujiwara, Katsuyuki Konishi, Daisuke Ono [he voiced Heiwajima Shizuo in a way I never thought it was humanly possible] and craploads of many others.

Mulling time is over, my friends. Please allow me to present you my top 5.

Last thing that made my jaw drop, roll on the floor, cry in despair and reach Nirvana, all in the same time: Towa no Quon

My advice to you, as a fellow anime fan? Never underestimate the power of older guys with glasses.

Anyway Kitsune, I didn't t know that Alex Row was your favorite character too. It's been ages since I last watched Last Exile.

Other than that, I think that you're as smart as you are interesting and everybody says that smart is the new sexy.

My friend, a sci-fi and historical fangirl, has a birthday on early October. So yeah! Libra and earth dragon, like the Supergirl actress. Sunrise is one of her favorite studios so she likes most of the Gundam franchise, Cowboy Bebop, Zegapain (known for featuring the talented Aries lady Ayako Kawasumi) and even Vision of Escaflowne.

By the way, Yoko Kanno (your favorite) was the composer of said song or Kiseki no Umi. There used to be a top 25 anime intros of the 90s with that song included. Tank was number one and I still agree, but I also love the fact that Tenchi Universe's OP was included also and Tekkaman Blade's.

Anyway, I'll talk to you soon.

I hope that you had a happy Easter Day and I was thinking about re-watching the 1998 Record of Lodoss War anime. I think you know who the composer and singer of the theme song are.

Anyway Kitsune, you got a birthday this summer also? I hope that I get enough time to learn basic Japanese.

By the way, I watched Sorcerer Hunters, Vision of Escaflowne, Madlax, Dot Hack Sign and Arc The Lad last year, via 9anime.

In other news, I'm thinking of re-watching Fafner in the Azure and Zegapain (underrated Sunrise anime featuring the awesome Ayako Kawasumi) this year too until this Behind The Line or third installment of the Fafner franchise is confirmed.

I kind of wish that the Bang Zoom ADR people could dub Fafner Exodus. Still, I love Sanae Kobayashi as Canon Memphis and the veteran lady Emi Shinohara did a great job too.

Speaking of Emi Shinohara, I happened to re-watch Big O a month ago while washing dishes so I could hear her voice and Wendee Lee's side to side. Girls know Emi Shinohara as Sailor Jupiter.