I was on an anime hot streak for a while, but burned out and took a break for several months.  Now I think I'm ready to pick up something new (LOST is almost over, after all), so here I am, back at the a-p anirec db.  I also finally saved up enough frequent flier miles to go to Japan, so I'm now set on learning Japanese... at least somewhat.

I'm not too interested watching most mecha, ecchi, or proxy-fighting shows, but am willing to give most things a shot. 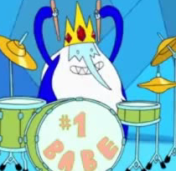 It's true, I am! And are you the legendary foureyedalice who I've read so much by and about? I am a great fan of your work. Can we be friends?

Sadly yes I am still in Knoxville. That's wonderful that you went back to school. I tried and was excepted into UTK for Asian studies centered around Japanese. But I couldn't afford it and I didn't want to go into major debt so I dropped out before it really even started. I am really jealous of you going to Japan. That is still a dream of mine. =^_^=

I would love a post card. But don't go to any trouble for me.

Oh wow! I never thought I would hear from you again. It has been a very long time. How are you? Great to hear from you.

Very randomly thought of you and realised I hadn't seen you active in forever. Hope all is well and health issues are sorting themselves out. :)