I'm a closet anime watcher, meaning, I love to watch anime but don't talk about it with my friends or family very often and i'm completely incognito about it.

I have a new found love for cosplay because of how detailed and amazing the costumes are, I AM not into actually cosplaying or going to conventions though. I may be REALLY into it, but I just can't see myself being with a lot of people who think they're right about anime. It's all subjective and oppinionated. I also have an anxiety disorder, so that wouldn't help at a big convention like Sakura Con.

I Do like to draw cartoon characters, superhereos, and actors, and sometimes i try my hand at anime characters. Lately, I've been drawing them to get my own manga like style.

See, I have a deviantart: Dakotasapphire

And I drew Hikki [not proportionally accurate, but I like to draw my own way haha] : My first anime that I actually remember watching was Sailor Moon, but I didn't know it was anime until later on when my sisters friend was watching Naruto and she said it was anime. I didn't know what 'anime' was before I was 11. I guess I used to be a wild child before who stayed outside all day [yey]. I love shounen anime, which isn't that normal for a girl, but I just do, plot does matter to me, but when it comes down to it, I just want comedy and action. Don't get me wrong, I love Scifi and supernatural anime with great plot lines [Steins;Gate, Ergo Proxy, etc], but when I really want something to get my blood pumping I watch something like Naruto, One Piece, or Bleach. I also LOVE certain shoujo sometimes. [Hana yori dango, Skip Beat, Wallflower, etc.]

Favorite Anime Character Ever: Zoro [One Piece] whom I've loved since I saw him fight on One Piece [years ago].I also think Kyon [The Melancholy of Haruhi Suzimiya] is magic, but unfortunately, I doubt we'll ever learn what his real name is [it's not kyon haha]. My standards for rating: (I rate based on my love for it, I'm not that huge of a critic)

5- Masterpiece, I loved it with all of my heart, Definatly worth rewatching

4.5- Perfect-ish, Could of been better, but I still loved it with all of my heart, to rewatch

4- Great anime, Could of been better, Wish there was more, worth rewatching

3.5- A little better than average, Entertaining, not the best story, May rewatch

3- Average. Entertaining, somewhat. Chances are slim to rewatch this anime.

My standards for want to watch, won't watch, stalled and dropped.

Want to watch- I seriously want to watch this anime... Sometimes it has a bad rating, but I'm a daring type and I want to check it out on my own. The anime might also have an incredible manga, so I might watch those too. I might watch it soley because it was created by a favorite mangaka of mine.

Won't Watch- Will not watch. This may be because I don't like the description, It has an extermly low rating with extremly bad reviews, I don't like the genres its in at all, or I watched the anime before it, and hated it utterly.

Stalled- An anime that I like and want to continue, but I forgot about it, and I'm watching another anime. Will eventually be back on my Watching list. Or, I liked the first episode, but doesn't seem good enough to be worth my time at the moment, so I will just stall on it, and When I do have time, I will watch it.

Dropped- Most likely, hated it completly. Some chance of me watching it. Might pick it back up because I'm intrested in

trying to watch it again.

Hello miss! So what do you love most about Roger Smith?

U'r Welcome (⌒▽⌒)☆ Thnx for following me back (≧∇≦)/

So, if want to keep the information posted in your blog, you will need to copy this information someplace else on the site. If you have any questions how or where to do this, please feel free to get back to me, and I will try to assist. (You seem to have blogs that would elicit good commentary if posted in the site's Forum topics - you may want to move your blog comments there in new Discussion topics to initiate some conversations!) 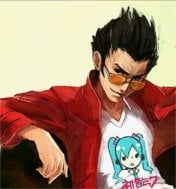 Exams are coming and now I really don't have any time to watch things! XD