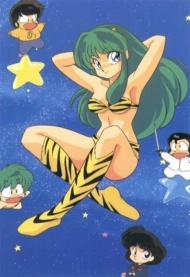 Urusei Yatsura was the first of its kind, and without it, anime just wouldn't be the same. Many, and I mean many, shows have followed its example (tenchi, and just about every other 'harem'). this show was one of the funniest, and most historically important series to have been made, yet sadly, due to drawn out, and low quality translations by a certain anime distributer in North America, it has remained relatively unappreciated in the west. Another reason to watch, is that this is the first major work written by Rumiko Takahashi. so, to the review! STORY:   There really isn't much of a story to... See full review