Martial arts aren’t my bag. I’ve never held an interest in them, but after a while of being told that I’d love History’s Strongest Disciple Kenichi and the fact that I’m a complete shounen whore, I just had to give it a go.

With a nickname like ‘Weak legs’, high school boy Kenichi Shirahama has very little going for him. However with a desire to become stronger and a desire to learn martial arts techniques, he joins the karate club. Unfortunately, he quickly gets into a bout with a behemoth of a freshman that challenges him to a fight, leading Kenichi to seek further help from a nearby dojo – and home of his new friend Miu Fuurinji – named Ryouzanpaku. As he begins training and gaining strength, the scrawny lad manages to win the fight, but in doing so attracts the attention of stronger foes, in particular the delinquent gang known as Ragnarok. What follows is a series of increasingly tougher battles interspersed with hellish training from his new masters.

Sure, the show follows in its genre’s predictable tradition – I mean, it’s a pretty safe bet that when our young protagonist learns a new kick-ass move he’ll make apt use of it in his next spat with an impossibly skilled opponent – but, while his continuing battle with Ragnorok is important to the plot, HSDK’s real story follows Kenichi’s progression as a person, rather than the linear stream of events that he finds himself caught up in. Although the young disciple improves at an abnormally fast rate (come on, this is shounen, what do you expect?) his increasing power with each battle doesn’t conveniently appear out of thin air at a key moment – Ichigo, I’m looking at you – nor does he suddenly whip out a new move from God knows where – Luffy, I love you, but all of the Straw Hats are all guilty of this. No, Kenichi has to train; he has to grow in both physical strength and character to overcome his own fear and insecurities so that he can have any chance at beating the living shit out of his opponents.

Kenichi’s training is like watching one of those home video shows where people send in clips of themselves getting kicked in the crotch by their three-year old daughter, or bitten on the arse by their beloved family dog – only much, MUCH funnier. Throughout the course of the series the poor sod endures all manner of deranged exercises designed to build up both his stamina and muscle strength. From holding heavy loads at arm’s length for fear of being stabbed in the side if he lowers his limbs too far, to being used as a cheap and efficient source of energy for a massage chair, Ryouzanpaku’s disciple goes through the ringer time and time again; but miraculously his suffering never gets old and remains just as funny when the final credits roll as it is in episode two.

HSDK’s visuals fumble around somewhere between variable and meh. The show peppers standards such as dramatic action lines and panning still images throughout for full-on shounenrific goodness. Outside of that, there are occasional careless continuity errors, such as disappearing bags and colour-changing eyebrows, along with a few shoddy images, like Honoka’s legs ballooning out over the top of her socks. The movement itself suffers in a similar fashion, wavering between average and awkward. Most of the time the anime sways towards the former, however – much like a naughty child sneaking a look at daddy’s ‘Adult magazines’ – HSDK occasionally slips into the latter while thinking nobody will notice. Luckily the sloppier animation only tends to occur during everyday scenes rather than mid-battle. One scene in particular with Yuuka walking towards Kenichi at school sticks out for it’s clunky execution, where the reserved megane exhibits as much fluidity as a lolloping Lego figure.

Sound wise HSDK remains fairly standard. The musical score is pretty much what you’d expect from this kind of show: fast-paced beats during fight scenes, and various instrumental variations of the opening themes to accompany touching and emotional moments of friendship, camaraderie and tranquility. All together the background music works well to complement the plotline.

HSDK’s seiyuu perform well throughout the series. The vocal cast consistently manages to alter their inflections to represent each character’s multi-faceted personalities. Whether it’s the contrast between Kenichi’s whiny and nasal “I don’t want to do this/die” side and his more direct and commanding determination, or the difference between Ma’s serious martial artist and his light-hearted and scheming pervert natures, each actor brings their character to life in a more than satisfactory manner.

While the Japanese voice acting fares well, ThePatches informed me that it is my duty to warn the general populace of HSDK’s toxic dub, so I gave in and tried it out. I didn’t last long before returning to the subs. Encompassing everything that I despise about dubbed anime in general, such as uber-cheesy vocals and the habit of adding extra letters into Japanese wordage (Ryouzanpaku becomes Reeyozarnparkoo), the American version also butchers some of the humorous content – in one case altering the script to make less sense of a relatively funny joke. But what I really want to know is why does Ma sound like Brain from Pinky and the Brain? “Gee Ma, what do you want to do tonight?” “The same thing we do every night, Kenichi – try to take photos of girls!”. Also, whoever thought that replacing Apachai’s high-pitched and naïve inflections with the gruff tones reminiscent of a lumbering Neanderthal should be shot. Twice. Then made to sing the theme tune to Lucky Star in a sailor uniform in front of all their macho friends while slowly bleeding out all over the carpet. *

The super-human central male protagonist generally tends to make or break any action filled anime, and they all have their own unique strength. Luffy is a rubber man, Naruto has the Kyuubi sealed within him, Natsu kicks wizard butt with his fire dragon magic, and Ichigo… well he has some awesome-assed power that has yet to be fully explained. Kenichi on the other hand varies from the typical hero. He isn’t inherently powerful and he possesses no hidden vigour; hell, he barely has any courage whatsoever. He’s just a regular guy who only becomes tough with genuinely hard work. Far from the cries of “I’m gonna kick your ass” that forms the basic mantra of any shounen lead, Kenichi whines, screams and wibbles his way through each obstacle, making a refreshing change from the norm.

As ever, it’s the supporting cast that steals the show. Though some of Kenichi’s enemies, such as the bizarre Siegfried – who feels the need to loudly hum Mussorgsky’s Night on Bald Mountain whenever he fights – provide a fair amount of interest, it’s the dojo masters who claim the spotlight for themselves. They break walls, punch sharks in the face, and regularly threaten Kenichi’s very survival with their rigorous training routines. My personal favourite, without a doubt, is Apachai. The juxtaposition between his incapacity for holding back his freakishly powerful Muay Thai techniques and his gentle, childlike, and dim-witted personality means that he alone generates a lot of humour. After all who could resist smiling when watching him answer the phone with the phrase “we have your children”, or earnestly hammering voodoo dolls to trees believing it to be a good luck charm? With this epitome of a gentle giant and the likes sake-swilling, karate-chopping Sakaki, snap-happy uber perv, Kensei, and the calm and intelligent – yet somewhat sadistic – Akisame making the young disciple’s life a living hell, the comedy shines brighter than the master’s devilishly terrifying eyes.

Though its timeline of events is nothing out of the ordinary, Kenichi’s personal journey makes for compelling viewing. Of course, while their number one disciple suffers at the hands of their training regime, the dojo masters keep the mood light and entertaining with their outlandish personalities. I certainly know that my day instantly brightens up when I hear a little cry of “Apa! Apapapa!” coming from my speakers.

* Please note, that I have awarded the above score for sound based on the Japanese version alone. To mark the audio on the dub as well would require me to subject myself to further aural rape, and I’d rather that my ears stopped bleeding.

Loved the anime and loved your review. Your review hit the nail on the head when it comes to summing the good and bad of this anime up. Also I loved some of the humor you used as well. I lol'd hard remembering when he answered the phone saying "we have your children".

I just finished the series on Netflix...Kenichi is incredibly annoying early on in the series but thankfully he does get better.  Most interesting is Kenichi's moral development that goes hand in hand with his improvements as a martial artist.  Though it sounds cheesy just to state it baldly, the reason the Shinpaku Alliance makes such headway against Rangnorök is because it's an alliance based on friendship and mutual respect instead of raw power and dominance hierarchy.  They're able to peel off Rangnorök's members one by one not through utter annihilation but by showing mercy and respect and kindess to one's defeated enemies, and showing them the error of their ways.  In the penultimate episode, when Kenichi became the living embodiment of each of his masters, I was cheering for him so hard I was in tears.

I also admit, part of what kept me watching was Miu...especially Carrie Savage's voice acting, which can make any character she voices irresistably loveable and adorable...also like Chris Sabat's character, Sakaki Shio (逆鬼 至緒?), ol "Scarface" himself, very much as well.  Story is a good balance of comedy and action and a dash of romance thrown in for fun.

I love this show, though I don't like how the female character designs go in the manga. Shounen to Ecchi.

But I like how the anime ended where it did. because now the manga will maybe be complete or near complete when someone decides to start with a second season, meaning there would be no need for fillers.

I cant beleive they havn't made anymore of the manga into anime, I mean they have enough chapters now 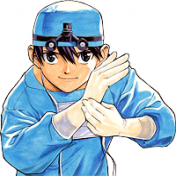 I just love this show, verry funny! Sadly it is too short, but you can always keep reading the Manga! You can keep the progress of Kenichi to become the Strogest Disciple in the world!(And of course, laught of the funny tranining that he has to complete!)