So how often do we hear "shoujo" and "classical music" uttered in the same sentence? Both entities dwell in vastly different realms of substance, media, and mind, and after watching La Corda d’Oro, I am convinced that it should stay that way. For the average shoujo-loving viewer, this series will be nothing more than a delicious catalogue of hot guys (who, as a side note, all happen to play instruments, but that doesn’t really matter). For the classical music junkie, it will twist a dearly beloved genre of music into something more akin to bubblegum pop.

Kahoko Hino, a regular high school sophomore, stumbles upon a fairy, receives a magic violin that anyone can play, and promptly finds herself in the school’s prestigious music performance competition. Throughout the next twenty-five dragging episodes, she gets to know her handsome competitors even while she confronts jealousy and sabotage. She also struggles to cope with her unfair advantage and her lack of skill. Sound interesting? It’s really not. Hino meanders along in a romantically drugged haze, and the show quickly tires with its loose plot and lackluster characters.

For those who enjoyed the masterpiece that is Nodame Cantabile, I urge you take precaution with La Corda. Within this sissified, sugared depiction of a rich Old World tradition, one will be acquainted with more sparkles than musical notes, with more tantalizingly open collars than instruments, with more bishonen than genius composers, and with more squeal moments than enriching tapestries of an underappreciated art form. Well, perhaps the intent of La Corda has always been more about catering to female viewers than educating them. But even the series’ shoujo elements, while pulled off in an aesthetically pleasing manner, hold the dangerous risk of leaving even the least discerning fangirls unsatisfied.

Of course, virtually all slice-of-life shoujo anime treads that fine line where filler and plot happily blend together. La Corda is no exception. Actually, the show benefits from an overarching premise with its four-round music competition; the viewer will see how Hino grows as a musician throughout the months that the competition spans. However, instead of shaping the competition as an integral plot device, the anime takes a form similar to a stock chart – moments of brief culmination at the competition rounds that give way to plotless lulls. The relationships that form remain hopelessly one-dimensional. The drama so integral to a shoujo is, in a word, nonexistent. The conclusion is slapdash, leaving absolutely no closure.

Bottom line: this series falls short in its role both as a showcase of classical music and as a shoujo anime.

La Corda d’Oro has a soft, pretty look, owing to its fine use of color shading. The backgrounds are not particularly detailed, but that does not mean they are simplistic. Actually, the pastel-like texture combines nicely with the clearly definable lines.

However, the series decides to spend most of its energy on a plethora of close-up face shots, which, while unneeded, become an integral method for retaining viewers. Shiny lips and smooth skin run unbounded in this anime. In fact, everyone’s skin is so smooth that they all resemble porcelain dolls. This is the show’s greatest strength – the men are positive drool-mats, even if they are shallow and indecisive to a one. At least, the prospect of impending eye candy is the thing that kept me watching.

Incidentally, La Corda appears to forgo CGI animation, which is normally fine, but hurts the scenes of people playing instruments. The musicians' movements are out of sync with the soundtrack. However, there is no need to worry, as most of the time we only see picturesque still shots that run throughout the performances.

For an anime that is supposed to emphasize the “heart” of classical music, La Corda hardly presents the best of what the genre has to offer. From countless Ave Marias to Chopin clichés, much of the featured pieces take the form of generic favorites, utilized to elicit the “Hey, I know this!” reaction than to actually refresh an old form of music. What’s even sadder is that, half of the time, they muddle up the titles. On the other hand, the music composed specifically for the anime boasts an inexplicable yet noticeable charm; I never tired of the background music.

The Japanese voice acting stands out not so much for how it was performed as for the actors behind the performances. Each seiyu speaks with a unique tone that supplies their respective characters with individuality. For example, Masakazu Morita's voice, which resembles a happy duck, virtually defines the trumpet player for me. Contrarily, the cellist’s voice is annoying, because it only slows down the already sluggish pacing. Whether I love a voice or hate it, La Corda succeeds in this aspect because the variety of lilts all so greatly help define a character’s identity from the others.

As with any reverse harem anime, the male cast becomes vital to La Corda 's survival. Each typecast is faithfully administered, from the cold prodigy to the friendly jock to the heartwarming nice guy. They fling into the mix the ever-popular “angel of light” who happens to have a dark side, as well as the aloof cutie pie. It’s as if nothing could go wrong with this tried-and-true arsenal of bodacious boys.

And yet, things do go wrong. Instead of the bishies coming into their own, they dig deeper and deeper into their preprogrammed personality modes. As a result, their bonds with Hino never grow. For example, the icy, talented Tsukimori continues sawing away at his violin, forever out of reach. The cheerful Hihara’s conversations never evolve past small talk. One could forget that the sleepy, supposedly endearing Shimizu even exchanged words with Hino on more than three or four occasions. At the end of the series, Hino’s friendship with each male does not seem to have expanded in any dimension.

This is not to mention the utter tedium that is the protagonist herself. Hino seems affable enough in the first episode. Yet as the anime continues, she judders into a completely static character, never progressing beyond the spouting off of pleasantries like “Oh, Hihara-kun!” or “I am going to try my best!” Then, to make things even more irritating, everyone begins to crush on her. Nothing connects.

Evidently, La Corda's superb art and well-gauged voices somewhat recompense the poor storyline and characterization. The series as a whole teeters on a precarious edge, and it all boils down to variances in taste and reasons for deciding to watch in the first place. One thing is sure: La Corda d’Oro has firmly planted itself within the ranks of the utterly mediocre. 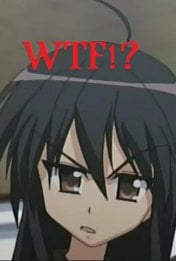 I definitely agree with your review. This anime just failed in the musical aspect and the romantic shoujo part as well. The characters just were not developed and neither was the plot. It kind of meandered through with little substance. Frankly for me, it fell flat.

I liked this anime at first but then at the episodes where her violin broke.. oh god kill me. It was a utter mess! All that was happening at that time (which was like 10 episodes!) is crying and mopping.

I would love it if someone would just redo this. Fix the plot and everything and I would love this show!

I was on the fence about whether I should drop this or not, and your review pushed me over the edge. If I'm not interested in the plot now, it would get any better. It's fine if you just want to see some bishounen, but other than that it has little depth to it.