Yo. I'm your average guy, well, not really. I like moe anime, as well as harem/romantic/ecchi series, and also giant robot anime (Sadly not enough of both at once). However I'll watch just about anything, if it catches my eye. I also read some manga, but not as much. I also like videogames, particularly JRPGs. There isn't really anything interesting about me so that's the end of my boring profile. 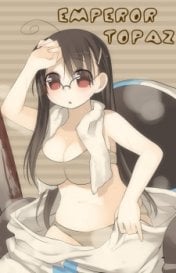 Right, though that's only if the eShop doesn't crash like it did with the Pokébank xD. I hope so as well, and knew you'd love the thought of playable Hilda (and even better if she uses the Tornado Rod for "wind" fun xD). That's fair, go Blue and Yellow Cures getting more screentime! Unfortunate but hopefully I don't need to use the site too much xD. Aye, I had a brief moment like that last night (er, Monday I mean) but luckily it was fixed quickly! Also this is just in case MAL dies, go paranoia! Sounds great, go goddesses having the ability to restore images xD. Aye, boo that getting together so much but it was fun to play Mario Wii U as we hadn't had an opportunity for a while xD.

That fits him well then xD. True, though Toriyama is the type to make things up as he goes xD. Thanks xD. It might be, I haven't heard for sure but poor Pluto! Indeed, nice name xD. Makes sense, go offscreen grinding like what LPers should do xD. Right, and that's fair so maybe Adélaïde should show off her huge thong ass again or another great girl will show off (and boo Gaul's eyecatch :/). Agreed, and I think I remember you mentioning the Tribe Cool Crew girl but it's still a shame! Thanks, glad you got it xD. I'm not sure myself either, maybe it's magic but go Tusk being tied up and at the mercy of a group of girls <3. Agreed for both, she's a great princess and knew you'd like the dragon girls xD. Great pun but agreed! That's a relief then, but it still stinks they didn't show off Leopard's ass xD. That they do <3. That's a relief but still boo not having butts :/. That's a relief for not being that terrible yet, but let's hope the imouto isn't ignored next week! That's a good one, but I meant more as far as Dio being your badass next season xD. Glad you liked Absolute Duo though! Indeed, that's a fine way to be fair xD. Knew you'd like the Yukarin's sexy voice as well as having an "evil side" of sorts, I know you like that xD (shame if we don't see her anymore though). Though I'm surprised that he didn't just shield and then punch the weapon like that xD. Agreed, forgot about the sling but good point! I remember that, boo not having a sexy buruma moment but agreed that she's adorable <3 (I liked her hair moving when she was excited xD). Great pun too xD.

Awesome idea, while you get the ojou Maria and the hot Spanish Juri <3. True, go borderline Pokémon getting off on good behavior and indeed for Mega Rayquaza being too powerful xD. Glad I remembered then, and figured you'd like the battle stories xD (and true about me being Steven xD). That they were <3. Also that's awesome, go the creator of Smash and Kirby for me and Zelda for you xD. Shame people are dumb about Japanese games though xD. Speaking of idiots boo SekaTsuyo being poorly rated and reviewed while people are kissing the feet of DxD New for some reason :/. That's not surprising about Yuri Bears being hard to genre, remember the creator's previous works xD. Cool about the presence about the Ogura meganekko, but while I do like the girl wearing her glasses that sounds like a sad way to taunt someone :/.

Soo sorry for the late responce but ive been really busy. Your very welcome ^^

If you have any questions or problems let me know and i would be glad to help. I love your header btw, cant go wrong with some booty XD

hi i bope you stay around

Hello and welcome to A-P!! I hope you enjoy your time here and get involved with the community! ^^

hahaha thanks and no problemobutts! If you have any questions, ASK THEM NOW, GO!