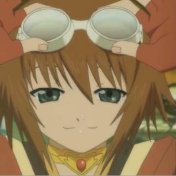 I can't believe yuri didn't make it into my top 3 favorite genres! It's definitely in my top 5, along with harem... Anyway, there's more to me than just pervy anime and manga. I'm actually working on a story with the intention of making it into a manga, and from there hopefully into an anime... It's sci-fi fantasy, with a generally serious feel but a good mix of humor and romance as well. I plan on leaving the more ecchi stuff to the fans. ;P (Which may very well include myself. XD I've already made some fanfics even though I haven't even finished my story yet. No, you don't get to read them. ^^'')

Oh, one thing must be said: I LOVE NEKOMIMI! Actually, I love many kemonomimi. Guys or girls, it doesn't matter. I even plan on buying a pair to wear myself! I've been to one animecon in my life, and was sadly lacking any cosplay. T-T Never again... Now I've been studying up on cosplay, so hopefully I'll be able to pull something off - I mean make it look good, not literally... *coughs* Aaanyway... I'm fairly open-minded, and I've found at least one thing in each of my least favorite genres that I liked, so yeah. I've enjoyed everything from The World Is Mine (horribly, wonderfully twisted and definitely for mature audiences only) to Pita-Ten (cutesy, chibi-ful, funny, blushie, and unexpectedly moving).

I mostly read manga, rather than watching anime. I mostly follow the three big Shounen Jump series, but I'll sometimes wander into some random manga that looks like it might be interesting or feature cats. XD

Oh, one more thing: I'm 1/4 Japanese. I wish to learn Japanese, and eventually go to Japan. I have an interest in martial arts and Japanese melee weapons, though my lack of money has thus far hindered my ability to learn or obtain any of these. I'm also a gamer, though I don't do well in tournament play thanks to having nobody to practice against. T-T Sometimes being a poor loner who lives in the middle of nowhere sucks.

Finally, I don't normally talk much, I just got bored. I'll stop now. *sweatdrop* See ya!