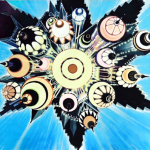 I'm a girl whose favorite genres of anime are horror and mahou shoujo. I'll watch most anything, though.

That is some bad news.

Last I heard, many people dropped their Crunchyroll subscriptions following the release of High Guardian Spice, including my friend from Texas. Physical media is nice, but have heard a great deal of Aniplex which has been ripping off several of my friends, but yeah! I would still love to pick up a decent amount of Blu-ray anime.

I do thank Aniplex and Sony (the Funimation app working and them or the staff not working is hardly okay) for making CartoonCrazy and others possible though.

I've also heard unsurprisingly numerous complaints about Crunchyroll regarding technical difficulties and it's funny that the old CartoonCrazy still works after all these years and AnimeKisa is still kind of new.

Yes, I heard that AMC owns Sentai and hopefully the interface will change, no one I know used it extensively. Ah! RetroCrush, my big Pisces friend told me how much she loved it. Maybe I'll check it out too because most paid streaming services don't have anime prior to the 90s.

After being informed about the Harmony Gold and Big West collaboration from a Gemini woman, I've been getting kind of excited about watching future Macross movies. I rarely get to go to theaters these days, but I'll make arrangements for the next Macross movie and buying "Do You Remember Love?" which has only been fan translated.

If the upcoming Star Blazers movie comes to theaters, then I may as well watch it too.

With that said, I hope that you're having a good January.

One place I plan to visit one day is the Okefenokee Swamp and I'm fully aware that it's dangerous, but I want it to stay the way it is. I've seen it on TV before ages ago.

By the way, where do you usually stream or watch anime online? I remember using Veoh before getting ripped off by Comcast. Eventually, I moved over to CartoonCrazy, better on desktop though.

Nowadays, I watch anime via the AnimeKisa and 9anime apps because I got an Android tablet. I was re-watching Big O in the kitchen yesterday by the way. The weekday is back, so I have to study more Calculus 3 and basic Japanese.

Hello miss! So how are things over there in Georgia? Haven't been there in years.

Hi, per the several announcements in the forum about making sure site/forum emails and names match, your forum account was set to be auto-deleted in the next 24 hours because the emails don't match. This means you would have lost all forum posts/history.

I've been manually fixing some user accounts that are slated for removal - your emails now match so your account won't be removed, but please confirm and change them to the other email if I (arbitrarily) chose the wrong one.